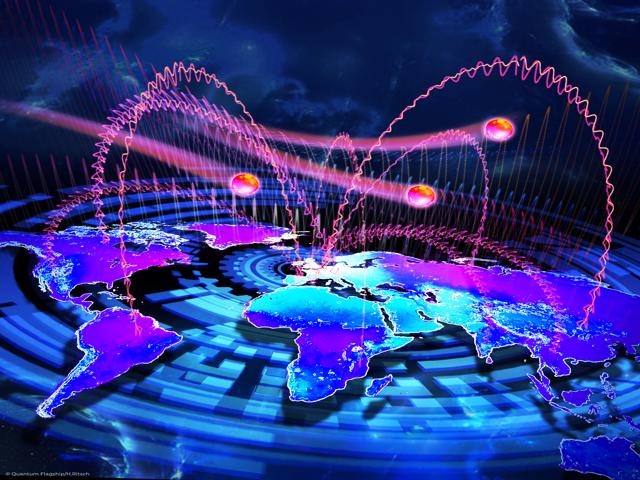 Scientists at the EU’s €1 billion Quantum Technology (QT) Flagship initiative have developed novel prototypes that use quantum encryption protocols to create the most secure transmission of sensitive information through the internet.

The recent announcement of Quantum Supremacy by Google makes the development of a first-generation quantum computer that can instantaneously unravel confidential banking, medical and national security data an increasing likelihood.

With fears growing that citizens’ digital information such as WhatsApp messages, personal emails, health information, or banking transactions – could become vulnerable to cyber-attacks, a secure line of defence is more critical than ever.

The QT Flagship is supporting four consortia that are making our data highly secure: the CiViQ consortium has developed efficient QKD protocols to secure this critical digital information; researchers at QRANGE have created quantum random number generators that can be implemented in such protocols; and UNIQORN scientists are searching for ways to miniaturise QKD down to the chip-scale to be easily integrated into any consumer device. Finally, researchers from QIA are aiming to put this all together, hardware and software, to build the future quantum internet.

This secure encryption cannot be intercepted or manipulated meaning data is ‘unhackable’. QKD works by transmitting light particles, or photons, over a fibre optic cable from one entity to another.Photons are made in such a way that any attempt to read or copy them will change their quantum properties, corrupting the information and letting the sender and receiver know that a third party tried to intercept.

CiViQ aims to make QKD a mainstream technology for communications and data transmissions at a worldwide level.

“We expect to use these prototypes in field demonstrations in a real optical network in 2020 while we will also continue to develop even more advanced systems with higher integration and performance in laboratory experiments,” Pruneri said.

The CiViQ approach is different from previous projects since QKD technology specifications are defined by end-user needs. Understanding its quantum end-users means CiViQ can for the first time integrate the QKD technology into existing modern telecom networks without the need to build ad-hoc, separate quantum communication infrastructure.

Random numbers are used to generate encryption codes that can protect our data. However, computers are unable to generate pure random numbers: they follow a pattern, are predictable, and therefore make our information hackable.

They will be integrated into any device that uses a communication network, like smartphones, computers, or even cars.

Project Coordinator at QRANGE, Professor Hugo Zbinden said: “There is a risk of being hacked with our classical computers and pseudo-random number generators given that they provide random bit sequences that have certain patterns. Numbers generated by a QRNG, on the other hand, cannot be predicted – and are thus provably unpredictable.”

While QRNGs is an available technology, their size and cost still make them commercially prohibitive for many applications. Deployable into everyday devices like phones, laptops, or cars, the low-cost QRNG developed by QRANGE can be easily integrated on standard CMOS technology.

“The project is working on three different approaches that will lead to three different prototypes. It is fundamentally important to generate truly random numbers: any deviation may adversely affect modelling or jeopardise security.”

“First we’re looking at smaller sizes – to make random number generation cheaper and integrated, and essentially to be able to fit the technology into any device. The second approach we’re looking at is speed – to develop a random number generator based on the interference of laser pulses with random phase relationship featuring bit rates of up to 10 Gb/s. And, finally, we’re developing a Self-Testing QRNG, which allows for continuous estimation of the generated entropy, with few assumptions,” Professor Zbinden said.

Current quantum communication systems are often big, bulky and too expensive for the mass market. Therefore, the UNIQORN project is developing pluggable quantum devices that can be miniaturised into small and reliable photonic integrated circuits.

“Not only are we providing the enabling photonic technology to accommodate quantum communications, but also bringing improvements in terms of robustness and reproducibility,” Dr. Hübel said.

One of the Quantum Flagship’s key objectives is to see the many components being developed by the QF-funded projects to become essential elements of the quantum internet. As part of this objective, the Quantum Internet Alliance (QIA) project aims to build a network for transmitting quantum information throughout the entire continent.

“Supporting large-scale research and innovation projects, the QT Flagship has already launched 20 projects with an allocated €132 million in its ‘ramp-up’ phase, the first three-year part of the Flagship, running from October 2018 to September 2021.”