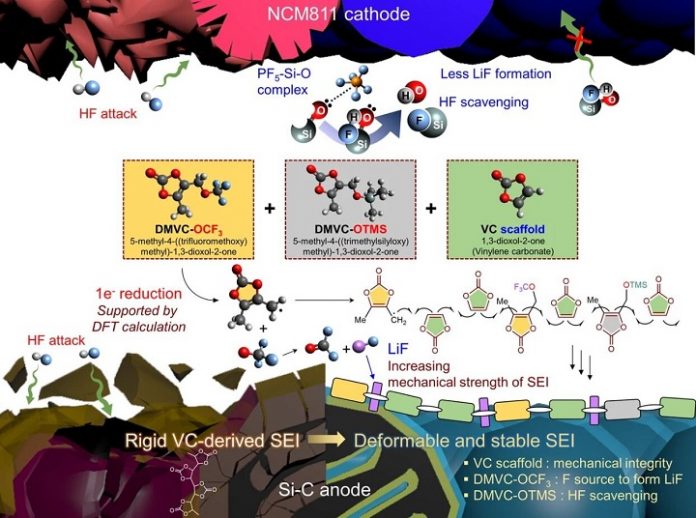 A joint research team, affiliated with UNIST has unveiled a novel electrolyte additive that could enable a long lifespan and fast chargeability of high-energy-density Lithium-Ion Batteries (LIBs).

As the demand for large-capacity batteries (i.e., EV batteries) increases, efforts are actively underway to replace the conventional lithium-ion battery electrodes with high-capacity materials, such as silicon or high-nickel.

Although silicon is an attractive anode material to improve the energy density of Lithium-Ion Batteries, they exhibit poor mechanical strength due to volumetric expansion during charging and discharging. High-Ni cathode materials also suffer from poor chemical stability.

In the study, the research team demonstrated that the creation of a stable and spatially deformable Solid Electrolyte Interphase (SEI) on a high-capacity Si-C anode could tolerate the inevitable volume changes induced by the lithiation of Si and could enable a long lifespan and fast chargeability of high-energy-density Lithium-Ion Batteries.

According to the research team, when the new additives were added to a large-capacity battery composed of high-Ni anodes and a Si-mixed anode, the initial capacity was maintained at 81.5% even after 400 charging and discharging cycles—10% to 30% better than the choice of VC (Vinylene Carbonate) or FEC (FluoroEthylene Carbonate), as an additive in LIBs.

“This achievement is the result of the collaboration of material structure design, experiment, simulation, and synthesis method research to actually make this material structure that can compensate for the shortcomings of existing additives (VC). It suggested a new direction for the development,” says Professor Choi, co-corresponding author of the study.

In addition, the research team also found that these additives could remove Hydrofluoric Acid (HF) from the electrolyte to prevent the metal (nickel) inside the high-Ni anodes from leaking out. The amount of metal inside the anode determines the battery capacity.

“This work presents a breakthrough in the development of electrolyte additives for high-energy-density Li-ion batteries,” noted the research team. “We expect that our systematic approach for rational molecular design and DFT-aided mechanism development offers a promising way to discover next-gen additives.