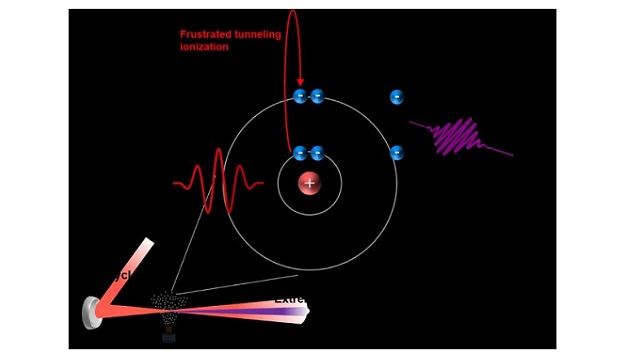 A new way to generate extreme-UV emissions using intense laser pulses, discovered by a team at the Institute for Basic Science (IBS), promises to find applications in high-resolution imaging, lithography, and ultrafast spectroscopy.

The IBS team produced coherent extreme-UV emission via frustrated tunneling ionization (FTI). The researchers found that the intensity of the emission depended on the ellipticity and carrier-envelope phase of the laser pulses. They also discovered that the propagation direction of the emission could be coherently controlled using the attosecond lighthouse technique.

When a strong laser light is shined on atoms, their electrons are free to temporarily escape from the parent atoms. As the laser is turned off, these “meandering electrons” can either recombine with their parent atoms or continue to “float”  nearby. Whether high-harmonic generation (the fast return of electrons to their parent atoms) or “floating”  (FTI) occurs, the result is the emission of light with a specific wavelength.

Lasers with ultrafast pulses have provided the ability to monitor and control electrons with subatomic resolution, allowing scientists like the IBS researchers to better understand real-time electron dynamics and generate customized emissions.

“We could identify a completely new coherent extreme-ultraviolet emission that was generated,” Kim said. “We understood the fundamental mechanism of the emission, but there are still many things to investigate, such as phase matching and divergence control issues.

“These issues should be solved to develop a strong extreme-ultraviolet light source,” he said. “Also, it is an interesting scientific issue to see whether the emission is generated from molecules, as it could provide information on the molecular structure and dynamics.”