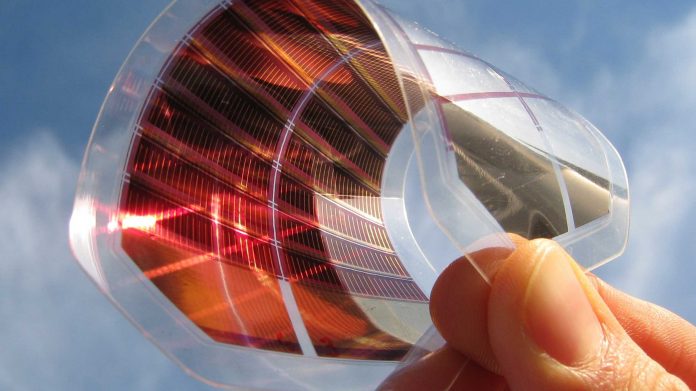 According to recent study, Researchers in the Science and Technology of Advanced Materials (STAM) developed a semi-transparent organic solar cell that  is more efficient and transparent than existing ones.

Semi-transparent organic solar cells (OSCs) have potential for providing low-cost, large-area energy conversion devices for various applications such as windows, roof covers and greenhouses. However, it is challenging to achieve semi-transparent OSCs with high power conversion efficiency (PCE) and high transparency at the same time. Usually, the active materials of OSCs consist of a binary blend of a visibly absorbing donor polymer and a fullerene acceptor. The average visible transmittance (AVT) of the cell can be increased by decreasing the binary film thickness; however, this goes at the expense of the PCE because less sunlight is absorbed by a thinner layer.

In a STAM study, a team led by Mohammed Makha from the Swiss Federal Institute for Materials Science and Technology bypassed this tradeoff between transparency and efficiency of OSCs by using a ternary mixture. In addition, they used a flexible and transparent top electrode that was applied via a lamination step. As an advantage, the lamination process is simple and compatible with roll-to-roll systems for OSC production from solution.

The team added to a visibly absorbing binary polymer-fullerene blend a dye as a third minority component. The dye absorbs light exclusively in the near-infrared (NIR) wavelength region and therefore does not reduce the visible transparency of the OSC. Due to the additional current generated via NIR absorption, the polymer content could be reduced without compromising the cell performance. Semitransparent OSCs with a uniform AVT or 51% and a PCE of 3% were demonstrated.

The researchers say that the concept of ternary OSCs with multiple acceptor or donor materials has been recognized before as a strategy to overcome specific limitations of binary blends. However, not many successful ternary systems have been found so far, because the developing film morphology is difficult to control. The team believes that their ternary blend performs so well because of a specific intermixed phase between the NIR dye and the fullerene; therefore, the system could successfully work with other polymers.