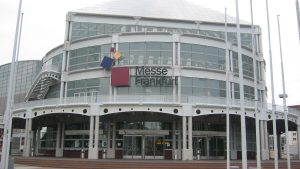 The Messe Frankfurt Group will once again end the financial year 2016 with a high level of sales and a very profitable result compared with the rest of the sector. For the second time in a row, Messe Frankfurt Group sales are set to exceed the €640 million mark and will be comparable with the previous year’s level. On presenting the Group’s preliminary key figures for 2016, Wolfgang Marzin, President and Chief Executive Officer (CEO) of Messe Frankfurt, emphasised: “Messe Frankfurt is the world’s highest-grossing organiser with its own exhibition grounds.” The company will reach yet another excellent result – probably in the region of €60 million – which is a marked improvement on the previous year. This year’s EBITDA will also be better than last year’s figure and set a new record. Marzin: “This means that we have established an excellent basis and can continue to invest in the infrastructure at our Frankfurt base, in our brands, and in digital processes.”

Detlef Braun, Member of the Executive Board of Messe Frankfurt, summed up the event year as follows: “We are setting new records with our event portfolio. In 2016, a total of 138 trade fairs and exhibitions were held worldwide under the Messe Frankfurt umbrella, featuring some 92,300 exhibitors – more than ever before.” The event attracted more than 3.5 million visitors. Messe Frankfurt’s activities outside Germany recorded dynamic growth. New records were also set here with 87 events and more than 49,000 exhibitors and 1.9 million visitors. Braun: “We created a strategic framework and are using our sector expertise to expand the global trade fair map with new events, for example in Vietnam and Ethiopia.” The international component on the Frankfurt exhibition grounds continued to increase, with three-quarters of all exhibitors and more than half of trade buyers at the company’s events hailing from outside Germany.

Messe Frankfurt is very actively involved in events in topic clusters relating to Industry 4.0. Uwe Behm, Member of the Executive Board of Messe Frankfurt, stressed: “SPS IPC Drives, which is held in Nuremberg, is the most important platform for the automation sector – the most powerful driving force behind the fourth industrial revolution. And Formnext powered by tct in Frankfurt will be showing the next generation of industrial production.” After last year’s successful debut, the event is well on the way to establishing itself as the flagship event for the international additive technology and 3-D printing sector.

Capacity utilisation at the Frankfurt exhibition grounds was healthy thanks to a high number of guest events, including 27 guest events and 160 congresses and conferences. New events, including Deutscher Marketing Tag (DMT) – the largest sector event in Germany for marketing decision-makers and professionals – will also be held in Frankfurt as of next year.

Construction work on Hall 12 is on schedule and on the budget. Uwe Behm: “Here, we are investing in the construction of a building which, at a cost of €250 million, constitutes a significant financial burden for our company.” Various sections of the construction have already been completed, as have the new, elegantly designed entrance portal for Hall 8 and the section of the Via Mobile moving walkway between Hall 8 and the Torhaus.

As regards Messe Frankfurt’s strategic direction, Wolfgang Marzin explained: “Our key growth areas are in good health and so are the factors that drive this growth – and we are tapping into new market share, in some cases by joining forces with other market players.” For example, a strategic marketing partnership has been arranged with the US Food Processing Suppliers Association (FPSA) with joint activities planned worldwide. Following the successful premiere of the Intersec Forum at Light + Building, the conference will be held next year parallel to ISH. No fewer than 13 events were scheduled to make their debut around the world in the financial year 2016. Wolfgang Marzin: “Our broad international base makes us less susceptible to the influence of factors from individual regions.” Messe Frankfurt remains committed to its overseas activities regardless of political circumstances: “Our trade fairs are neutral communication and trading platforms where we cultivate longstanding relationships with our customers and partners.” So far, the company has planned ten new events to be held by 2018. Speaking about Messe Frankfurt’s future plans, Wolfgang Marzin emphasised: “We will continue to invest in line with our customers’ expectations and have the necessary capital to fulfill the goals of Messe Frankfurt, both now and in the future. For the financial year 2017, we have our sights set on surpassing the €650 million sales mark.”

A video statement by Wolfgang Marzin on the financial year 2016 can be found on YouTube http://m-es.se/q4HB