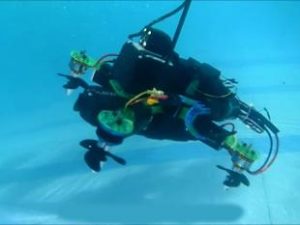 In collaboration with Defence Research and Development Organisation (DRDO), IIT-Delhi has launched a ‘science park’ under the Joint Advanced Technology Centre to develop smart technology for India’s defence.

Below are a few of the new-age defence technologies in the works at IIT-Delhi:

IIT-Delhi is creating a material called aluminium cenosphere syntactic foam which will be placed as a layer in buildings, bridges and flyovers to protect them from collapsing or suffering severe damage during a bomb blast. Dr. Tanusree Chakraborty, Associate Professor, Department of Civil Engineering, explains that during an explosion the voids inside the material would absorb the blast and the material would shrink in volume. This material can also be used in tunnels, ammunition depots, armoured vehicles and tanks. If a tank with a layer of this material moves over a mine, 80 per cent of the blast impact will be taken by the material.

Ballistic helmet
The helmets being used by the Indian Army can only protect a soldier from splinters, rocks and a bullet that only grazes the helmet and not directly hitting it. But the helmet being made by IIT-Delhi will contain layers of varied materials, including ceramic and cellular foam, which will blunt the bullet, reduce its velocity and absorb its energy. Professor Puneet Mahajan, Applied Mechanics, IIT-Delhi, says they have tested a few types of material. The new helmet will make sure the bullet does not penetrate the helmet there is no ‘back face signature’, which is a deformity caused on the helmet by the bullet. A deformity on the helmet will cause injuries to the soldier.

Unmanned Underwater Vehicle (UUV)
Indian Navy officers studying in IIT-Delhi are designing these vehicles in collaboration with Botlab Private Limited. Ishaq Makkar, a faculty at Applied Mechanics, Naval Construction, IIT Delhi, explains that these machines would be able to relay better information and images to a ship from under water than by navy divers. “When a diver goes underwater, he can sustain himself there only for a few hours. The report he gives after coming back up is incomplete because he does not have the adequate technical expertise. But with the UUV, I can see what it sees,” Makkar says.

The IIT-Delhi is developing two UUVs—the Hydrocopter and the Nemo. The Hydrocopter will be used for underwater surveys of the hull of a ship to ascertain damage to it, says Vishnu Sreedhar, a student working on the project. The Nemo will be used for finding sea mines. Work is in progress for also placing payloads on these UUVs.

“There are several variants of UUVs internationally. But we are developing ones that will be best suited for Indian waters, which have very low visibility,” said Makkar.

Aerostat
Aerostat is an airship or hot-air balloon, which can be used for surveillance along India’s borders with a high-resolution camera attached to it, explains Dr Suddhasatwa Basu, Associate Dean, Research & Development, IIT Delhi. Work is to start on this.

The aerostat is similar to an Unmanned Aerial Vehicle, but is a cheaper option even when compared to satellite imagery. As the aerostat will float at an altitude of about one km, it will provide much-higher-resolution photographs than satellite images.

Intelligent textile
IIT-Delhi is creating a uniform for soldiers with a metal strip containing an antenna and sensors. The antenna could be used for communication between a unit of soldiers and their commander. The sensors will detect poisonous gas, even if it has leaked several kilometres away from the soldier. “The smallest gas leak, chemical weapons and nuclear radiation will be detected by the sensors embedded in the soldier’s uniform and information about it will be relayed to the commander,” says Basu. This system will replace heavy communication equipment that soldiers carry now.

13 firms Blacklisted for 10 years from dealing with Defence Ministry