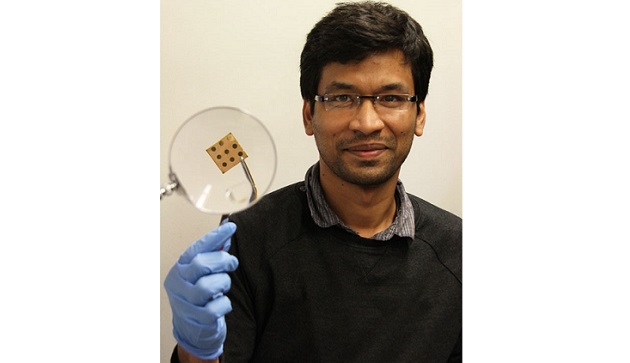 A composite material that is a strong light emitter as well as an efficient charge conductor, colloidal quantum dot (CQD) LEDs, has been developed by a team at the Institute of Photonic Sciences (ICFO). The nanocomposite system comprising IR CQDs is low-cost and can be integrated with CMOS, in addition to being highly efficient.

The CQD composite structure was engineered at the supra-nanocrystalline level to achieve an extremely low electronic defect density. To suppress electronic defects in CQD solids, the researchers created a matrix in which they embedded the emitting QDs. The matrix served as a remote electronic passivant for the emitter CQDs. To achieve efficient electrical injection, the matrix was engineered to facilitate efficient charge funneling into the QD emitters.

The researchers used the composite devices to construct solar cells and tested their performance in the IR range. They found that the effective passivation achieved in these nanocomposites, along with the modulation of the electronic density of states, resulted in solar cells that could deliver open circuit voltage (VOC) close to the theoretical limit. The VOC, which is the maximum voltage available from a solar cell, increased from 0.4 V for a single QD configuration, up to ~0.7 V for the ternary blend configuration.

“The most surprising finding of this study is the extremely low electronic trap density that can be achieved in a conductive QD material system that is full of chemical defects arising on the surface of the dots,” said professor Gerasimos Konstantatos. “The very high quantum efficiency of those LEDs has been the consequence of this passivation strategy we demonstrate. The other exciting outcome has been the potential to reach such high VOC values for QD solar cells. That was synergistically achieved thanks to the very low trap density and a novel engineering approach to the density of states in a semiconductor film.”

The team believes that its results could open the way to using a range of the spectra that has not been fully explored for new applications such as on-chip spectrometers for food inspection, environmental monitoring, and manufacturing process monitoring, as well as active imaging systems for biomedical or night-vision applications.

“Next we will focus on how to further exploit this reduction of electronic density of states synergistically with other means to allow for simultaneous achievement of high VOC and current production, thereby targeting record power conversion efficiencies in solar cell devices,” said researcher Santanu Pradhan.