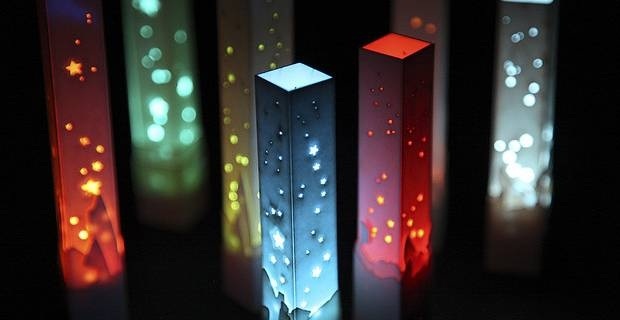 LED is breaking barriers and from the tiny red indicator light on switch panels, it is today everywhere imaginable, from screens to walls, ceilings to wearables.  This light-speed journey is still moving on to newer breakthroughs and innovations happening in labs around the world.  Here are some of the recent advancements in LED technology that promises to lighten up our world brighter.

Ostendo EpiLab, Carlsbad, Southern California based company has introduced the world’s first RGB LED. The LED based on GaN technology uses three specific materials to construct a quantum structure to emit different color lights, the color LEDs can be emitted independently or mixed. Conventional LEDs typically are monochromic, and can only emit a single wavelength. To achieve colorful RGB lighting effects, more than one LED is required to mix the desired color.

The color is determined by the phosphor coating or substrate material used for the LED. Only a handful of researchers have attempted to make a single LED chip capable of emitting full range of RGB colors.

Electrical and computer engineering scientist in University of Illinois at Urbana Champaign has developed a new method of making brighter and more efficient green LEDs. With an industry-standard semiconductor growth method, the gallium nitride (GaN) cubic crystal was grown on silicon substrate to produce a powerful green light for solid-state lighting.

Researchers from National Tsing Hua University in Taiwan, recently published a paper in scientific journal ACS Nano, where they successfully made a white LED product made from Alrali earth metal rather than rare earth metals. The LED is basically made from Alrali earth metals, combined with metal organic frames (MOF), graphene and other materials on the top and bottom layer to make a white LED. The LED made from new materials can emit light beams with similar quality to natural lights, and does not emit strong blue light. The lumen efficiency is significantly improved, because it does not have to filter out other colors.

Tokyo Institute of Technology and Kyoto University jointly announced their findings in developing a red light emitting semiconductor that does not use costly rare elements.

The researchers are turning to earth-abundant elements as an alternative, such as using nitrogen and zinc components as criteria for their screening methods. The low cost materials can reduce the production costs of red LEDs and solar cells.

Nanjing University researchers found a new application for hybrid nanocrystals, where it can be used to fill holes in InGaN or GaN LED structures to significantly boost white LED lumen efficiency.

The findings were published in Applied Physics Letter, which noted the key to raise Color Conversion Efficiency (CCE) is determined by effective non-radiative resonance energy transfer rather than integrating blue light emitted by the InGaN or GaN LED, or down conversion materials for instance phosphor or even nanocrystals, where down conversion radiation often occurs.

The initial phase of development is based on UV LED collimated exposure machine, the collimation half-angle can be controlled within ±2°, and the uneven lighting distribution smaller than 3%, while light intensity can reach 40 mW/cm2.

Xiang spent many years developing a yellow light on a single LED die chip that can be synthesized under high temperatures of 2,000℃. If a blue light LED chip is paired with a 24W light source on a 5.5 mm x 5.5 mm on a single die chip, the yellow die material can steadily emit white light. Due to the chips thermal resistance, high conductivity, LED lamps will become more resilient, and have longer lifetimes. The LED bulbs are not easily damaged by high temperatures after long hours of illumination, so it is highly suitable for lighting applications in luxury cars, automotive lights, high speed rail, airplanes and submarines.

Mercedes in the Pursuit of Perfection.

Mercedes-Benz will soon be presenting MULTIBEAM LED headlamps with a gridded light source containing 84 LEDs, enabling even higher resolution of the light output. This will afford other road users even better protection from dazzling, while improving illumination of the road ahead for the driver.

As a result of the absolutely freely configurable light distribution, it is possible for the first time to implement all high- and low-beam functions of the Intelligent Light System in entirely digital mode and without any mechanical actuators. This will make a wealth of new, adaptive light functions possible which will render night-time driving yet safer for both the driver and other road users.

This technology is set to advance at a rapid pace: in the medium term 1024 individually controllable pixels per LED chip will enable a further improvement in night-time visibility, resulting in further enhanced safety. The partners Infineon, Osram, Fraunhofer Gesellschaft IZM, Hella and Daimler have just achieved a breakthrough in the ‘μAFS’ research project in the form of a new type of LED chip with an extremely fine structure.

Monolithically structured pixel LED semiconductor layers are built up on a silicon substrate which, via the integration of circuit parts, allows the selective control of more than 1024 individually addressable pixels per LED chip. This LED technology is to be installed and tested in a Mercedes-Benz experimental vehicle in 2015 for the first time.