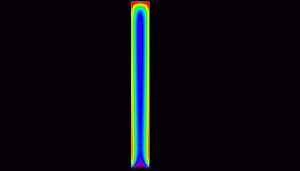 New kind of a nanowire UV LEDs have been developed by a research team at National Institute of Standards and Technology (NIST). The UV LEDs have an ability to produce five times higher light intensity based on a simpler shell design.

There are various applications of UV LEDs such as water purification, polymer curing and medical disinfection. The NIST researchers have been trying to create nanowire-based LEDs for scanning probe tips intended for electronics and biology applications.

Researchers have been also experimenting with the nanowire cores made of silicon-dope GaN, which has extra electrons, surrounded by by shells made of magnesium-doped GaN, which has a surplus of “holes” for missing electrons. When an electron and a hole combine, energy is released as light, a process known as electroluminescence.

The brighter LEDs are fabricated from nanowires with a so-called “p-i-n” structure, a tri-layer design that injects electrons and holes into the nanowire. The addition of aluminum to the shell helps confine electrons to the nanowire core, boosting the electroluminescence fivefold.

The nanowire test structures were about 440 nanometers (nm) long with a shell thickness of about 40 nm. The final LEDs, including the shells, were almost 10 times larger. Researchers found that the amount of aluminum incorporated into fabricated structures depends on nanowire diameter.