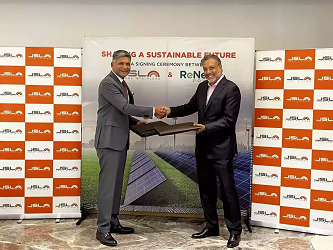 Leading stainless player Jindal Stainless Limited (JSL) has partnered with ReNew Power to develop its proposed 300 MW hybrid energy project. The project will generate 700 million units of green energy annually through a mix of solar and wind technologies, JSL said in a statement.

JSL MD Abhyuday Jindal in an interview earlier shared his company’s plan of switching from a thermal energy-intensive manufacturing setup to renewable energy alternatives such as solar and wind power in states like Odisha, Haryana, and Rajasthan.

The plan will be taken forward accordingly post discussions with the interested parties, Jindal had said in September 2022.

On the company’s partnership with ReNew Power, Jindal said, “We are committed to power future growth through renewable sources of energy only and this step further cements our resolve.

“The project with ReNew Power is expected to start commercial operations by May 2024 and will aid in carbon abatement by over 6.5 lakh tonnes per year. We already reduced our emissions by 1.4 lakh tonnes in FY22.”

By 2050, the aim is to make the company a net zero carbon emission entity, he added.

ReNew Power Chairman, and CEO Sumant Sinha said, “We are delighted to partner with JSL in developing renewable energy sources for the Indian manufacturing sector. We believe this unique model will revolutionise the way power is procured by corporate India. This innovative Wind-Solar hybrid system will accelerate the adoption of clean energy in a hard-to-abate sector.

As part of its efforts to become green, JSL will set up to set up a green hydrogen plant with Hygenco India Private Limited. The unit plant will help the company to reduce its carbon emissions by nearly 2,700 MT per annum.