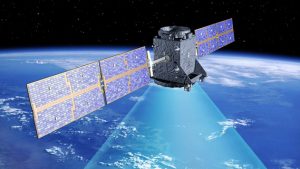 ISRO has signed three MoUs (Memorandum of Understanding) with the Andhra Pradesh government for using geospatial technologies in state governance and development. The MoUs were signed on 15 March, near Vijayawada. Andhra Pradesh Chief Minister Chandrababu Naidu and ISRO chairman Aluru Seelin Kiran Kumar were present at the signing.

Andhra Pradesh had already been using inputs from ISRO’s programs for various applications, and the MoUs are a commitment to get help from ISRO to extend these applications.

The first MoU was signed to provide experimental meteorological services to the state. The Andhra Pradesh Varuna app for Android smartphones was launched on the occasion. Varuna is the Indian God of water. The application uses a large number of ground-based radio stations and weather forecasting services by ISRO, to deliver an accurate and up to date platform for weather information to the end user. The twenty-four-hour forecast is updated every six hours.

The second MoU was signed for the provision of disaster management services. Inputs from the various earth observation and meteorological satellites would be combined with data from the ground-based National Remote Sensing Centre in Hyderabad to provide Disaster Management Support (DMS) to the state. Data from the field will be combined with near real-time inputs to monitor forest fires, cyclones, floods, earthquakes, landslides, and tsunamis.

The third MoU was signed for the use of ISRO technologies to keep track of the natural resource of water across the state. The state and the space agency have agreed to collaborate on a web-based geoportal, AP State Water Resources Information and Management System (APWRIMS). The APWRIMS will host all the spatial and non-spatial data on water resources in the state. The inventory of water in the state will be maintained with inputs from satellites and validation models.

US Commits to Work with India in Ensuring Maritime Security in...