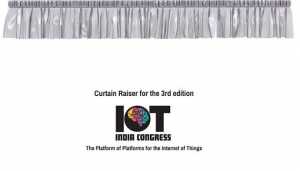 The IoT India Congress has opened entries for two prestigious awards – IoT Start-up Awards and Thought Leadership Awards. The awards, currently in the 3rd edition, aim to recognise extraordinary work by start-ups and individual thought leaders in the IoT space. The call for entries is open until September 15, 2018.

IoT Thought Leadership Awards is a prestige award for individuals who have led business transformation through IoT or helped monetise its potential. Gopichand Katragadda, CTO, Tata Sons is chairing the awards and leaders including Mandeep Maitra, People Practioner, Leadership & Transformation Coach and Vinod Kumar, CEO and MD, Tata Communications are among the jury members. The winners will be felicitated on 9th of October at IoT India Congress in Bengaluru.

IoT India Congress 2018, a platform-of-platforms for empowering business outcomes using the Internet of Things in India, will be a two-day mega event between 9-10 October, 2018 at NIMHANS Convention Centre, Bangalore. The event, in its 3rd edition is conceptualized and designed by members of the Institution of Engineering and Technology’s (The IET) IoT Panel – an independent and neutral visionary think-tank led by select industry leaders. The panel envisions laying a solid foundation in the next step of adoption of IoT by supporting policy makers and bringing together the practitioners and IoT enablers to work together and create a platform that is industry efficient as well as robust.

Dr. Rishi Bhatnagar, Chairman of the IET IoT Panel said, “As a neutral platform, IoT India Congress, allows organisations and individuals to come together to discuss and deliberate the future of IoT adoption and implementation in India. We are keen to identify and acknowledge the exciting work done by start-ups and individuals in the field of IoT through these awards. We received good number of nominations in the past two years and we are really happy to see great minds working in the IoT space. This year too, we look forward to seeing some great nominations coming in. Wishing luck for everyone participating”

Dr Gopichand Katragadda, Chair, Thought Leadership Awards, Chief Technology Officer, Tata Group said, “It is inspiring to see India aspire to serve as a catalyst for innovation in IoT. The IoT ecosystem is supported by a conducive start-up climate and concerted efforts of thought leaders. As one of the biggest platforms for IoT players in India, the IoT India Congress aims to encourage and acknowledge both, start-ups and thought leaders who have been working towards accelerating the adoption of IoT in the country. The thought leadership awards is a unique platform that recognises vision, drive and initiative demonstrated by leaders in the IoT ecosystem to take the industry forward.”

Amitabh Sinha, Chair, IoT Start-up Awards and Co-Founder & CSO, Meetingsandoffices.com said, “As a nation with one of the largest startup ecosystems in the world, India is truly becoming the hub for IoT innovation. The IoT India Congress, one of the largest platforms in the IoT space, brings together the best minds in the industry and showcases truly revolutionary IoT innovations. We have seen startups come up with outstanding innovations in the past and through the Startup Awards this year, we aim to provide young startups a stage and spotlight to launch themselves to a global arena. We are excited to see what lies in store for the IoT India Congress in October and wish the participants good luck.”