The landscape of industrial networking

As industrial performance improvement initiatives such as Industry 4.0 and the industrial internet of things (IIoT) become commonplace, the need for a resilient and site-wide networking infrastructure is paramount. Wireless communication techniques offer a viable solution for many applications but are prone to interference and wireless infrastructure costs. However, wired networking, already the firm favourite for many corporate IT applications, is becoming well established for industrial applications. Ethernet, and its industrial counterpart, Industrial Ethernet, offers exceptional reliability, quality of service, and bandwidth capability. However, for many endpoint ‘edge’ sensors, the bandwidth capability of enterprise networking architectures far exceeds that required. That said, high bandwidth capabilities are much in demand for a site-wide networking backbone. Ethernet has already become popular for building automation and communications infrastructure because of its ability to transfer power over the data lines – power over Ethernet (PoE) lines. The retail industry is also embracing Ethernet for powering point-of-sale terminals and self-service points.

In the industrial domain, the tenets of an IIoT deployment require an army of sensors collecting data from across the automation process together with myriad actuators and controllers. Together, they equip the process automation and analysis systems with the ability to learn, oversee and manage the entire production process for optimal operating efficiency. The technical requirements of the endpoint sensors and actuators, however, vary considerably. A gas pressure sensor, for example, may only need to sense the pressure and transfer bytes of data values every 10 seconds. Compare that to a video camera used on a bottle-labelling line streaming megabytes of image data to a neural network to check for correct label placement. The primary networking requirement for each endpoint may appear to be simply the bandwidth. However, other factors, such as link latency and determinism, are essential attributes for precise timing applications, for example, an industrial robot.

There are other increasingly important factors that system integrators face, particularly in large scale implementation projects involving thousands of endpoints. In these projects, it quickly becomes apparent that the network cable cost is high, and en masse represents a significant size and weight. The number of individual cables, four pairs in a Cat 5e/Cat 6 Ethernet cable, impacts the overall weight and influences its bending radius, vital in machinery with moving parts. Also, the thicker the cable dimensions, the fewer cables will fit in a standard-sized conduit. Installing thicker cables also typically take longer to draw and fix, extending the time to deploy and commission. Another consideration is that, typically, industrial equipment may operate in conditions where ingress protection is mandated. Thicker cables typically require larger connectors and terminations, further increasing the overall cost of deployment.

Very few IIoT implementations today are entirely new. Often, existing production facilities are updated from long-established programmable logic controller (PLC) infrastructure that used legacy networking architectures and protocols. Any new network protocol ideally needs to support legacy versions so that engineers can incorporate existing plant production assets into a new or updated installation. Many of the legacy protocols used serial RS-232 and RS-485 interfaces. Without standards in place, industrial automation suppliers often developed their own proprietary networking methods, effectively locking an implementation to one supplier’s equipment. Interoperability with other vendors equipment became a significant issue. Standards such as PROFIBUS, CC-Link, Modbus, and CAN are examples of some of the more popular legacy network protocols, many of which can be found in operation across production facilities today. Fieldbus is a collective term used to describe a networking architecture capable of implementation in various topologies – daisy chain and star, for example. Fieldbus is covered by international standard IEC 61158. Fieldbus standard IEC 61784-1 documents different communication profiles, of which PROFIBUS is one.

Recently, two open communication protocols have emerged as ideal candidates for new IIoT implementations yet also support the legacy connection methods highlighted above. These are IO-Link and single-pair Ethernet (SPE). IO-Link is a simple, serial interface communication method, and single-pair Ethernet brings the pedigree of an enterprise-class networking protocol to the world of IIoT.

Defined by the IEC 61131-9 standard, IO-Link is designed as a short-distance serial communication point-to-point network link between industrial endpoints and a backbone network infrastructure such as Ethernet or Industrial Ethernet. It operates in a single master, multiple slave configuration architectures – see Figure 1. 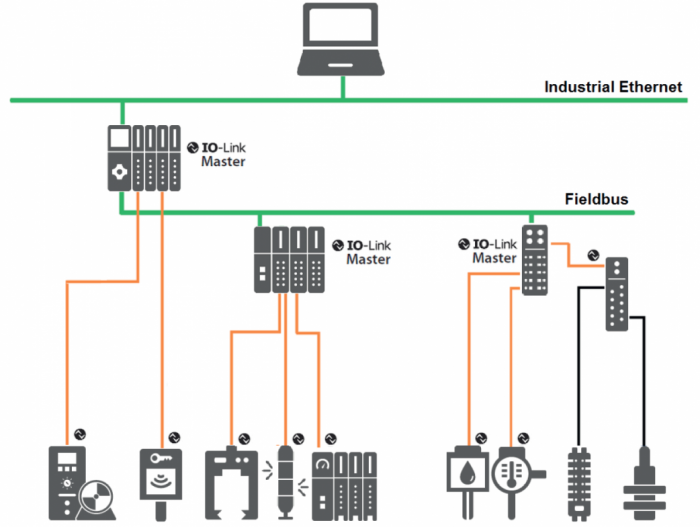 An IO-Link master hub can either connect directly to an Ethernet backbone or an IO-Link device (slave) or Fieldbus port of another IO-Link master, as illustrated in Figure 1. Sharing an architecture similar to a legacy Fieldbus implementation, IO-Link is quick to configure and commission. An IO-Link master configuration tool manages individual port assignments and operating parameters.

At the physical level, the IO-Link interface requires either a 3- or 5-conductor unshielded cable, and the industrial standard IP65/IP67 M12 connector format is specified in the IO-Link pin assignment standard, IEC 60974-5-2.

Figure 2 illustrates the pin assignment of an IO-Link device. Pins 1 and 3 are used to deliver up to 200 mA of galvanically isolated power to the device at 24 VDC. Pin 4 signal – termed C/Q – is the serial data switching and communication line. There are two port types defined for a 5-pin IO-Link master connection, type A or type B. For a type A plug, pins 2 and 5 are not specified but available for individual manufacturers to determine. However, typically, pin 2 is used to indicate that an IO-Link master port operates either in a digital input mode (DI) or as a digital output (DQ).

Type B connections are used for IO-Link devices that require more power. Pins 2 and 5 are used to provide additional power. See Figure 3a and 3b. 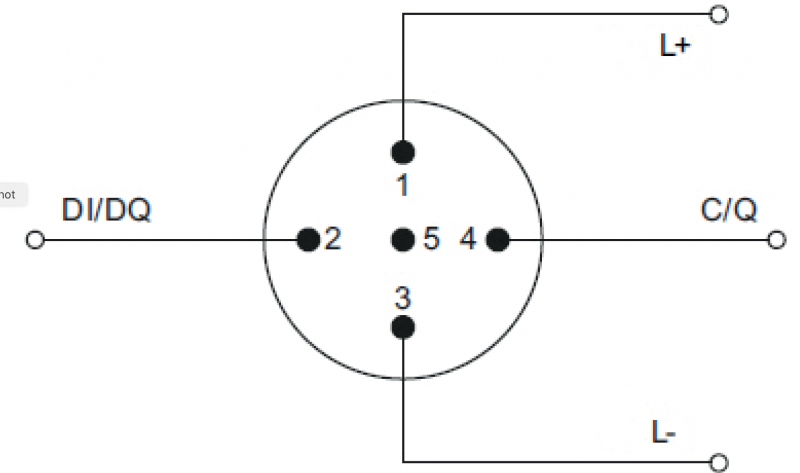 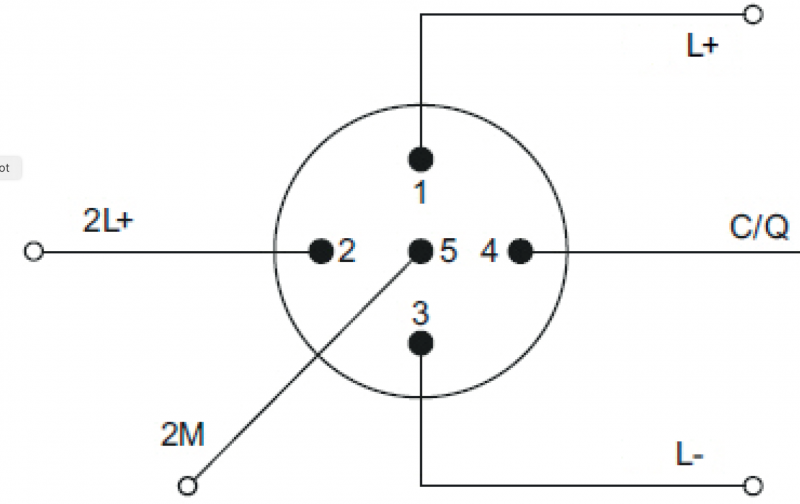 Single-pair Ethernet: Taking a robust and reliable networking protocol and making it suitable for the demands of IIoT deployments 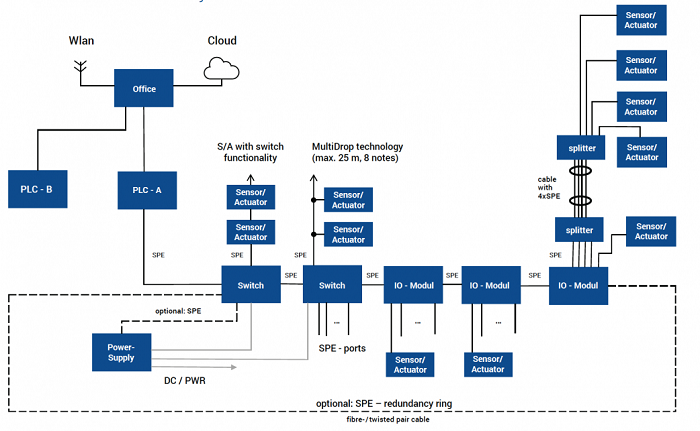 SPE is specified under the IEEE 802.3bp 1000Base-T1 standard for gigabit Ethernet over a single pair. The set of SPE standards continue to evolve, increasing bandwidth and distance limits. The evolution of Ethernet standards and capabilities is illustrated in Table 1.

Achieving the same gigabit data rates over a single pair compared to using four requires operation at a significantly higher frequency, up to 600 MHz, compared to IEEE 802.3ab operation at 125 MHz.

Single-pair Ethernet’s PoDL capability introduces a total of 15 power deliver classes accommodating a range of working voltages and maximum current ratings up provide up to 60 watts to a powered device.

Perhaps the most noticeable departure from the 4-pair Ethernet standard is the replacement of the RJ45 connector standard. Given the challenging environmental conditions SPE operates within, a new set of standards stipulate different connectors, some with ingress protection IP65/IP67 ratings. The IEC 63171 standard defines different connector types, including IEC 63171-5 for industrial M8/M12 connectors. Cable connector diameter depends on the maximum power requirement. Maximum bandwidth capability is also a factor in selecting a connector type.

IO-Link and single-pair Ethernet, a winning combination for IIoT deployments

Individually, IO-Link and SPE deliver many tangible benefits to IIoT and industrial automation deployments. However, in late 2020 the IO-Link Community announced the formation of an IO-Link over SPE working group. The intention is to combine both IO-Link and SPE’s best parts to gain further cost and communications infrastructure savings. The IO-Link protocol and data models are not being replaced; they will be transferred across further distances over SPE than possible using existing IO-Link.

Smart factory and operational efficiency initiatives such as Industry 4.0 promise to deliver many commercial benefits. Implementing these initiatives can be a costly process that takes many months. New communication and networking methods such as IO-Link and SPE make the task of system deployment less involved, saving budget and time