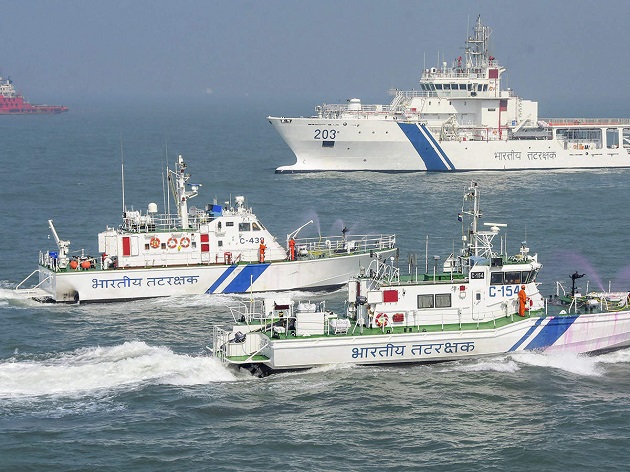 The Coast Guard (ICG), with a meagre force and two vessels in 1977, has now grown into a major coastal security force with 156 ships and 62 aircraft. The force also became the fourth largest in the world after the ones in the US, the UK and South Korea. It proposes to have 200 vessels and 100 aircraft by 2025.

Briefing media on the eve of its 45th Raising Day, additional director-general V.S. Pathania, Coast Guard commander of the Eastern Board, said the ICG has played a significant role in securing Indian coasts and enforcing regulations within the maritime zones of India. True to its motto “Vayam Rakshamah”, meaning “We Protect”, the service has so far saved over 10,000 lives and apprehended 13,300 miscreants since its inception in 1977. On an average, Coast Guard saves one life every second day at sea, Pathania underlined.

The Coast Guard, despite restrictions imposed by Covid-19 pandemic, maintained a strict vigil in Indian Exclusive Economic Zone (EEZ) by daily deploying about 50 ships and 12 aircraft. Deterrent patrols both at sea and air have enabled seizure of contraband worth Rs. 1,500 crore, including 24 kg of gold and narcotics on the east coast, apart from seizing more than 10 foreign fishing boats and arresting 80 persons operating in Indian EEZ during 2020.

Incorporation of “Prevention and Measured Response” during the passage of 11 cyclones last year ensured that more than 6,000 fishing boats with about 40,000 fishermen got escorted to safe harbours. “In anticipation of disasters during cyclones, our forces had been sent to vulnerable areas in advance, so that no time is lost in rescuing fishermen at sea, including during cyclones Amphan and Nivar,” the commander pointed out.

ICG is also collaborating with littoral countries to combat transitional maritime crimes and enhance maritime safety in its area of responsibility and in the region.

At the ground level, ICG is conducting periodical awareness among local fishermen on use of modern gadgets which would alert them in times of disaster, Pathania added.