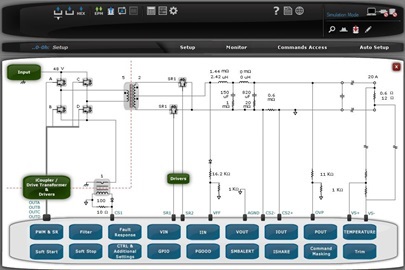 A dc-to-dc converter regulates a varying input voltage to a (usually) fixed output voltage via a feedback control system. The feedback control system should be as stable as possible to avoid oscillation or, at worst, unregulated output voltage. The control system should also be as fast as possible so that it can respond to dynamic changes, such as a fast input voltage change or a load transient at the output, and minimize deviations in the regulated output voltage. To represent the behavior of a control loop, a typical Bode plot can be used to show the phase shift and the gain of the loop as a function of frequency. This control loop can be realized with analog or digital technology.

Some digital power supplies offer control loop optimization, enabling very fast response to dynamic influences. Figure 1 shows an example of a circuit with an ADP1055 controller IC, which features digital control loop optimization. Digital controllers give the designer numerous controls, some even dynamically that is, during operation. Figure 2 shows the various ADP1055 functions that can be controlled by means of the ADP1055 evaluation software.

A particularly interesting setting option, with respect to the control loop, is offered by the function Nonlinear Gain/Response, a setting accessed via the Filter button. The Nonlinear Gain/Response enables dynamic adjustment of the control loop, for example, immediately after a load transient. When a power supply experiences a large load transient, the output voltage normally swings above or below its ideal regulated value. In an analog-only control loop, the components in the control loop and the power supply power stage are chosen to minimize these fluctuations over most expected conditions. The advantage of a digitally adjustable control loop, such as the one featured in the ADP1055, is that the response of the loop can be adjusted on-the-fly to compensate for widely varying situations.

Figure 3 shows the interface for controlling this function. The typical behavior of the output voltage after a high-to-low load transient is shown in blue. The voltage response at the regulator’s output usually overshoots, as shown. Overshoot can be minimized by briefly increasing the control loop gain when the output voltage exceeds certain thresholds.

In the example shown in Figure 3, the set output voltage is nominally 12 V. The adjustable control loop gain can be set to a number of values depending on the output voltage. For instance, if the voltage rises above 12.12 V due to an increased gain in the error amplifier, the control loop can be set in the corresponding pull-down menu. There are three other voltage thresholds above 12.12 V that can have independent gain settings. Note that these gain settings are completely independent of the poles and zeros that are set when designing the regulation loop.

An adjustable, voltage-dependent gain setting makes it possible to find control loop settings that offer an accelerated response to voltage overshoots. Through this, the quality of the output voltage feedback control can be optimized. Note that the optimized control loop characteristics for normal operation are not affected. Dynamic adjustment of the control loop in specific situations, such as after a load transient, is possible with digital controllers such as the ADP1055, but is difficult to implement with conventional analog control loops.