How to connect a Residual-Current device?

Residual-current devices, commonly referred to as RCDs, are used in many practical applications. They can be found in fuse boxes, electrical switchgears or industrial machine control systems. A residual-current device (RCD), protects the user of the installation against electric shock. Therefore, not only the efficiency and reliability, but also the proper connection of this device is important. 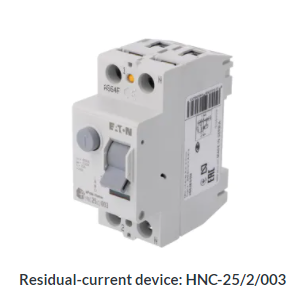 The current transformer is the key component of the RCD, thanks to which the device works. It measures the difference between current flowing through the conductors. This value should be 0A.

Another element related to the current transformer is the trip relay. If the measurement made by the transformer shows an imbalance (difference) in the current in the conductors, the RCD will trip, cutting off the electricity supply.

The operation of the RCD should be checked at least once a month. After pressing the button on the switch, the test circuit will be started, which will simulate a difference between the currents in the live and neutral wires of the appliance then the device should work and cut off the electricity supply.

In addition, RCDs are divided into three groups according to their sensitivity:

We should also remember that the residual-current device cannot protect us from direct contact with the electric wire. Disconnect the power supply before any activities!

How to connect the RCD – Installation Diagram

The connection of a residual-current device is relatively simple, but a few rules must be followed. An RCD must not be used as a single element between the power source and the load. It does not protect against short circuit or overheating of the wires. For more safety, a combination of RCD and overcurrent circuit breaker, at least one for each RCD, is recommended. 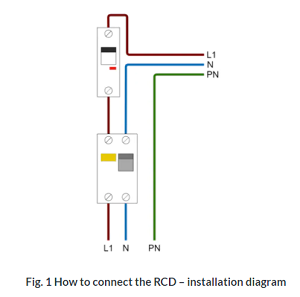 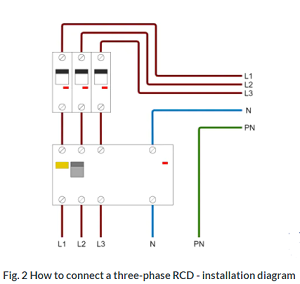 Connect the phase (brown) and neutral (blue) wires to the RCD input in a single-phase circuit. The protective conductor is connected with e.g. a terminal strip.

The phase wire at the RCD output should be connected to the overcurrent circuit breaker, while the neutral wire can be connected directly to the installation.

Connection of a three-phase RCD

For this connection, pay attention to the maximum current that can flow through the RCD (rated current of the RCD).

Why does the RCD trip?

RCD tripping is often discussed on Internet forums. There are many reasons for this: if there was no problem with the RCD for a long time, and it suddenly started tripping, the problem may be a faulty installation or a faulty appliance. If the installed switch causes problems from the very beginning, the fault may be its incorrect connection or wrong selection for our installation. When choosing the right residual-current device for your household, pay attention to the following parameters: