How Does ADAS Save Lives And Cars? 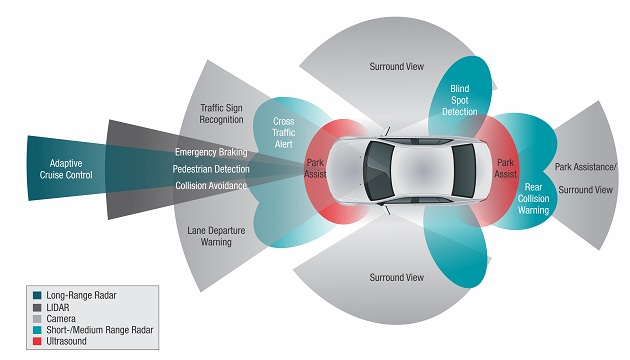 ADAS or Advanced Driver Assistance Systems are designed and implemented to assist the person behind the wheels during driving. The basic objective of this human-machine interface is to increase the safety feature for both – those inside the car and those on foot or in other vehicles.

How does ADAS Assist?

ADAS uses sophisticated electronics and advanced software, coupled with sensors that assist drivers in avoiding errors in judgment. Research suggests that the majority of road accidents happen due to human errors caused by distracted driving. In such a case, wouldn’t accepting the assistance of technology to mitigate the imperfect driving behavior of gullible human beings make perfect sense for most drivers?

Multiple variants of modern vehicles have such systems pre-insalled to help every driver in avoiding accidents, collisions or even any out-of-control driving experience. Without interfering too much, the technology is smart enough to alert the driver in time and also take control of the vehicle, only if and when the need arises. The adaptive features also help automate lighting, GPS/traffic warnings; engage emergency braking, cruise control, lane-changing assistance; offer a bird’s-eye view, drowsiness alerts, connect to smartphones, and reveal blind spots. Hence, implementation of ADAS components is as beneficial to the aged driver like it is for the young driver.

How does it help the older drivers?

Road safety for senior citizens or aged drivers is largely defined by physical vulnerability and functional limitations. In case of a crash, both these factors contribute to the relatively high mortality rate in older drivers as compared to the younger lot.

Despite their age, older drivers might have an extraordinary driving experience which comes in handy while anticipating and analyzing tricky and confusing situations. However, with age as the mental and physical capabilities of a person declines, they become vulnerable and prone to errors in judgment. ADAS warns them beforehand and accordingly helps them with extra time to think and act. This time, which might even be a fraction of a second can actually compensate for their reduced reaction time owing to age, perceptual and/or physical degeneration.

How does it help the young drivers?

Though the young drivers are mentally alert, nevertheless they are prone to distractions of the digital or connected world. While the older driver guards himself against human factors that can influence his/her momentary lapses, the same doesn’t hold true for the younger lot.

The younger drivers could often voluntarily lead themselves into a precarious traffic situation just for the sake of adventure or thrill seeking. Youngsters may be even more prone to driving under the influence of alcohol and often flout traffic rules just for the sake of being a rebel. It may also happen that they are distracted by various psychological preoccupations such as problems at work, talking on phone or operating a music player while driving. The Fear of Missing out (FOMO) is one of the major factors that leading to road accidents and crashes. With ADAS systems in place, such incidents if not totally made extinct – could surely be minimized to result in saving a lot of both, life and property.

Why do accidents happen?

Every driver has a unique set of driving competencies and a psychosomatically defined response time. The better the driver copes up with discrepancies by communicating well with other road users and adjusting the speed and position of his vehicle, the more in-control he is. If their perceptual weaknesses (varied factors such as age-related mental and physical condition, alcohol, stress, fatigue, emotions, distraction etc.) overpower this ability to stay in control, the chances of accidents are maximized. There are boundaries to every human’s perceptive abilities, that are minimized due to these factors and ADAS components can actually step in to compensate for the loss in human perception.

How ADAS helps in avoiding accidents?

While comparing capabilities with task demands, the simple rule says that if capabilities of the driver are higher than task demands, then he/she will be in command and things will be easy to handle. However, if task demands are higher, due to whatever reasons, it will be tough for a driver to drive smoothly under difficult situations and the journey might end up in a crash.

In such a scenario, where task demands are high, ADAS comes into play. It intervenes and helps the driver to get the situation under control. This can be done by prompting the driver to lower his speed, change the trajectory or relative-vehicle position or by communicating with other drivers on the road with indicator lights. Accordingly, ADAS supports the drivers in lowering the task demand and helps their capabilities to get the upper hand in averting a probable crash.

With such enhancements in every turn of the wheel or push of the pedal, this is how ADAS enhances the abstract of ‘driving experience’ for one and all in multiple ways. As these components are evolving and maturing, they are also paving the way for partial and fully autonomous vehicles. However, even if it’s assisted or autonomous, we are on a QuEST to keep you always in control behind the steering wheel.