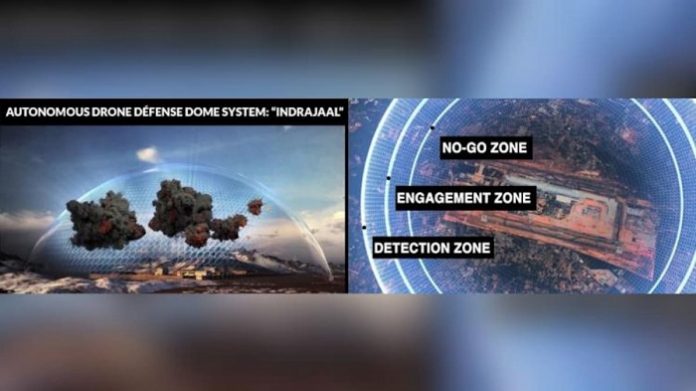 Grene Robotics has designed and developed “the country’s first autonomous drone defence dome called Indrajaal”. The firm has stated that an Indrajaal unit has the capability to autonomously protect an area of 1000-2000 sq km against threats such as UAV’s, incoming weapons, loitering munitions, and In targets.

The firm has stated the development of Indrajaal was critical because manual weapons and point based-based defence systems can’t fight modern warfare, which is driven by AI and robotics. “For the first time in India and many times, globally rogue forces have adopted cutting-edge technologies such as UAV’s, Smart Swarms, etc. Jammu Air Base on June 27th was attacked by such technologies to drop explosives next to the Mi-17 hangar,” Grene Robotics noted in a press release.

It adds that point defence ANTI-UAV systems will not be able to counter and protect large defence bases, NCR and linear infrastructures like international borders and such sensitive areas against increasingly modernising threats such as the PLA, which is already toying with advanced weaponry.

Explaining how Indrajaal works, Grene Robotics noted the Autonomous defence or Weapon Systems is the 3rd revolution of warfare. Indrajaal’s design principles are based on delivering such autonomy to the defence forces. It leverages a combination of 9-10 modern technologies that are powered by Artificial Intelligence (AI), cybersecurity and robotics.

Indrajaal is “capable of identifying, assessing, deciding, acting and evolving autonomously in real-time. Whether the threat is single or multiple or a combination of UAVs, Low-RCS, Loitering munitions and such, Indrajaal is capable of countering all such threats,” noted the firm

Key attributes of Indrajaal are:

Commenting on Indrajaal, Wg Cdr MVN Sai (Retd), CEO Defence, Grene Robotics said,  “I urge the defence leadership to take an integrated and comprehensive approach against all the UAVs, loiter ammunition swarm drones and low RCS threats with indigenously developed Autonomous Defence Systems. Conventional defences will be overwhelmed in a swarm attack scenario and an AI-Enabled Autonomous Dome with its own ecosystem of sensors and processing is the way forward. The process of establishing a fully functional system is an evolutionary process and needs technology vision and user involvement.”