Govt bets big on solar power, to double capacity by 2020 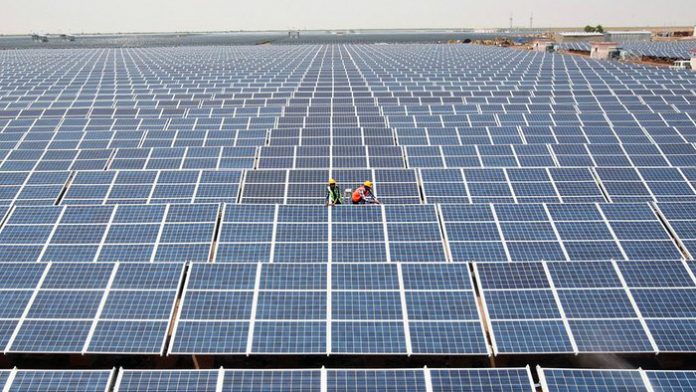 The government on January 22, 2017, announced an ambitious scheme to double solar power generation capacity under the solar parks scheme to 40,000 megawatts (MW) by fiscal 2020.

The centre proposes to extend Rs8,100 crore in assistance to fund 30% of the initial project cost of developers. India had solar capacity of 9,012.69MW as of 31 December.

The move, which comes in the backdrop of solar power tariffs hitting a record low of Rs2.97 per kilowatt-hour (kWh), is an important step in creating an ecosystem which will enable the scaling of solar power in the country to achieve the target of generating 100GW of solar power by 2022. This is because a solar park will provide the building blocks—land and grid connectivity—to set up big solar projects.

These parks will be set up in partnership with Solar Energy Corporation of India (SECI) and the state governments.

The cabinet committee on economic affairs (CCEA) chaired by Prime Minister Narendra Modi approved the scheme, which will lead to setting up of 50 solar parks with capacity of at least 500MW each or more across the country by 2019-20, said Piyush Goyal, Union minister for power, coal, new and renewable energy and mines, at a media briefing.

To be sure, finance minister Arun Jaitley had, in his 2017-18 budget, proposed the additional 20,000MW under the ambitious solar park programme.

In another decision, CCEA cleared a Rs5,723.72 crore investment by state-owned SJVN Ltd to revive the 900MW stalled hydroelectric project on the Arun river in eastern Nepal. Once the project is completed in about 60 months, Nepal will get 21.9% of the power free of cost and the rest will be transported from Dhalkebar in Nepal to Muzaffarpur in Bihar.

Goyal said the project will also strengthen ties with Nepal and generate employment to 3,000 people in both countries. Hydroelectric power is seen as a source of power that is vital for maintaining the stability of the grid as the share of renewable sources of power, which are susceptible to weather conditions, is increasing in the grid.

Winning bidders managed to keep the tariff low with the help of state-offered land and payment guarantee and by keeping the hedging cost low on foreign borrowings.

State governments keen on solar parks will allocate land for the project and nominate a project developer to the central government, which in turn will grant Rs25 lakh to the developer for preparing a detailed project report and financial assistance of Rs20 lakh per MW or 30% of the project cost, whichever is lower. The proposed capacity will generate 64 billion units of electricity per year and will help reduce 55 million tonnes of carbon dioxide over the projects’ life cycle, said an official statement.

“Doubling of solar park capacity demonstrates India’s commitment to a better future for the next generation and to fight the adverse effects of climate change.”- Piyush Goyal, minister for power, coal, new and renewable energy resources and mines