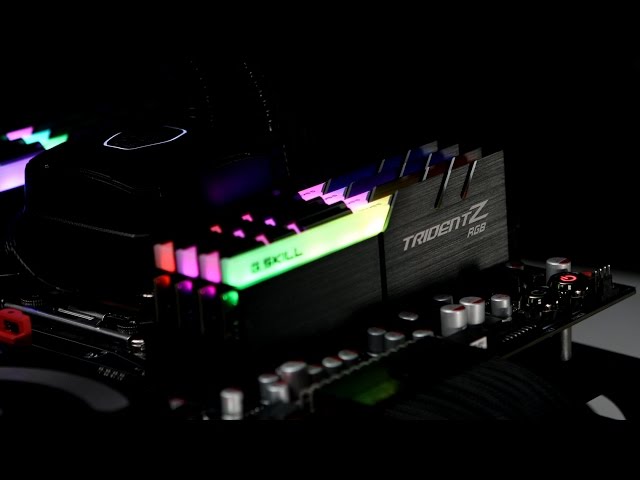 System memory maker G.Skill International is bringing a new series of DDR4 memory sticks packed with RGB lighting. Called the Trident Z RGB Series, the sticks feature an uncovered, full-length light bar stretched out across the top surface of the heat spreader. These DDR4 sticks don’t require an additional power connection to illuminate their light bar thanks to what G.Skill calls an “incredible feat of engineering.”

According to G.Skill, the new Trident Z RGB memory sticks can reach clock speeds of up to 4,266MHz. They are based on a custom 10-layer printed circuit board (PCB) and “hand-picked” integrated circuit chips so the new memory sticks can hit that 4,266MHz speed. Overall, the Trident Z Series is the company’s flagship desktop memory offering, which includes a dual-stick kit reaching clock speeds of up to 4,133MHz.

“Trident Z RGB series memory kits are rigorously tested under proprietary G.Skill test methods for reliability and compatibility to ensure the highest possible quality. And like all other G.Skill memory, the Trident Z RGB is covered under a limited lifetime warranty, as well as full support for XMP 2.0 for easy overclocking and simple BIOS setup,” the company said.

Each Trident Z RGB memory stick will display a rainbow of colors by default that will move across the light bar in a wave-style effect. The colors and lighting effects can be customized, but G.Skill won’t provide the necessary software until February. The actual Trident Z RGB memory sticks aren’t slated to hit the market until mid-January, so users won’t have long to wait if they want to customize the lighting to match their current PC lighting system.

There is a good chance G.Skill’s colorful Trident Z RGB memory will make an appearance at CES 2017 in a few weeks. Until then, the company provides a video tease of the memory sticks in action, revealing their awesome illuminated effects in groups of four. That said, be prepared: the rainbow of colors may cause viewers suddenly want a bag of Skittles.