The ST25R3911B-DISCO is the first NFC and HF RFID development board on the market that can switch from low to high bit rate operations, and vice-versa, using a single chip. Combining the STM32L476RE microcontroller (MCU), and the ST25R3911B NFC / HF RFID Reader, it is a one-stop solution that can easily scale from a simple tag reader to a high bandwidth set used for sensitive information like passports. Hence, after releasing the most versatile NFC SIPs, ST continues to draw from its wealth and breadth of experience in near-field wireless devices to introduce the most flexible development tool.

No other company offers such a powerful all-in-one package. The STM32L476RE MCU runs at 80 MHz and its architecture integrates a dedicated single precision (FP32) floating-point unit to optimize certain computations. The FPU supports add, subtract, multiply, divide, multiply and accumulate, and square root operations, which enable the creation of powerful applications that can process vast amount of data without calling on additional libraries that would be slower than a hardware implementation.

The chip also includes a full set of DSP instructions, and a Memory Protection Unit (MPU), to enhance the processing of security operations. As systems must guard against attacks that try to duplicate data, eavesdrop, or corrupt communication, the ST MCU ensures that standards can be met with little impact on the overall performance. For instance, ISO 18092 (NFCIP–1) devices must deal with secret key exchanges, and encrypt data using the AES 128-bit method to ensure the integrity of the information, and prevent hackers from accessing it. Since the ST25R3911B-DISCO can be the starting point of a passport reader, for instance, securing users’ data is of the utmost importance.

The ST25R3911B NFC/RFID reader integrated into the Discovery Board is the only one on the market today capable of switching from low to high bandwidth, and vice-versa, without the need for an external IC. By default the board offers a high bit rate of 3.4 Mbps to suit a vast majority of applications. However, it is possible to move certain resistance to switch to the NFC Forum matching mode that increases the range by 10 %, while decreasing the bit rate to 848 kbps. It helps engineers replicate as faithfully as possible the performance of their final design, to better prototype and test various use cases.

This transceiver also supports up to 1.4 W of differential output, which greatly extends the reader’s range, without the need of an external amplifier. Furthermore, its Automatic Antenna Tuning system enables engineers to tweak phase and amplitude, to ensure that this one chip will be optimized for their own products. They can even proceed with these optimizations during manufacturing, to adjust for last-minute design modifications. Hence, not only can the components of the board be easily ported to the final design, their flexibility and technical specification ensure a simpler circuit, and a more cost-effective Bill of Materials. 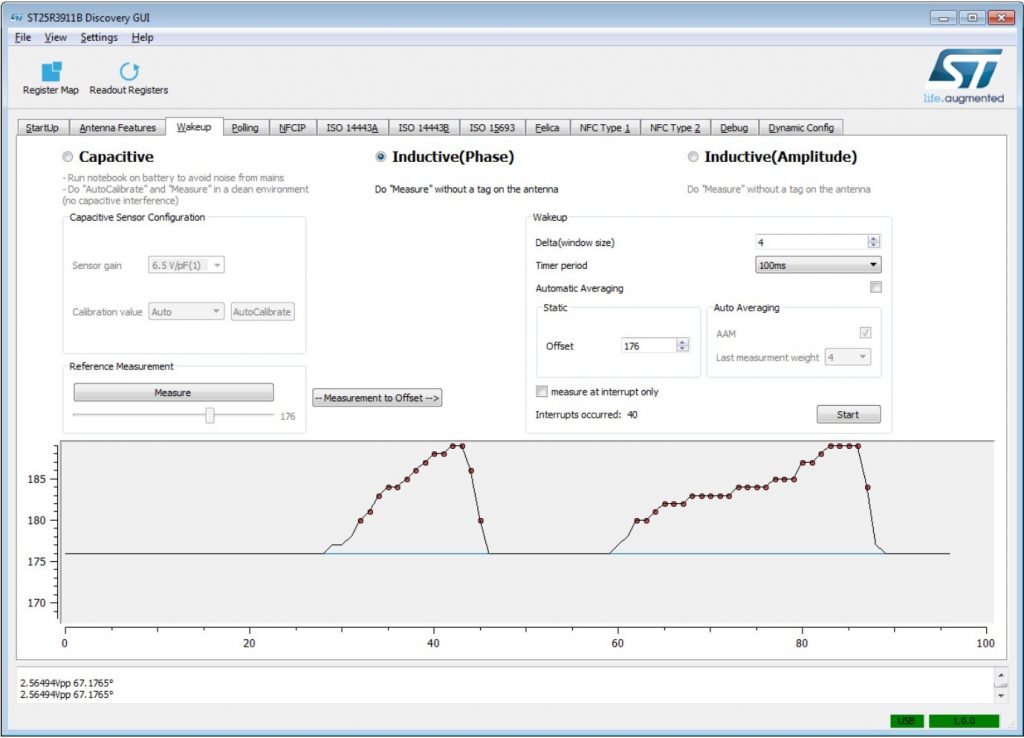 The Discovery Board’s flexibility is also manifested in the choices it gives engineers in regard to the way it handles incoming communication. Its low power capacitive sensor means that as a tag approaches the reader, the change in capacitance wakes the system. This solution offers a great range, and works with all card types, but the sensing module requires power. Thanks to ST’s components, the system needs less than 5 µA in sleep mode, which is by far one of the most frugal solutions available. As a result, this system is great on payment terminals, or readers with batteries.

However, the ST25R3911B-DISCO board also include inductive wake-up. Using an electromagnetic field at 13.56 MHz, a tiny object can start to make the receiver’s coil resonate to generate power and turn the system on. This mechanism works a lot like the wireless charging solution of the STWBC-WA. It doesn’t need any external power, but it often demands that the tag touch the reader, like a hotel keycard, or company badge, for instance.

ST has greatly simplified the setup and configuration of the ST25R3911B-DISCO by providing the STSW-ST25R001 software, which offers a Graphical User Interface (GUI) for Windows. It can tweak the Automatic Antenna Tuning system, mentioned above, and more quickly implement one of the many standards supported. It is available for free, and ST provides further documentation to guide users through the firmware upgrade process, and the many settings available.

Teams interested in building a complete solution will also want to turn to the ST25DV-DISCOVERY, a development board with an NFC and HF RFID daughter board that can serve as a card, the ST25DV being compatible with both protocols. As a result, they’ll be able to design the reader and the tags, using ST’s comprehensive and intuitive boards and software tools. Both will soon be available in retailers. The ST25R3911B-DISCO should have an MSRP of US$50