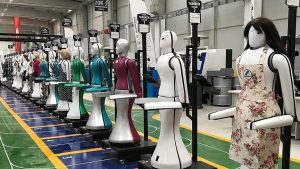 Turkey’s first factory that will produce human-like robots opened on Nov. 4 in the Central Anatolian province of Konya.

Humanoid robotics factory AkinRobotics has been established by the AkinSoft software company.

Speaking at the inauguration ceremony, attended by employees and technology enthusiasts, AkinSoft Board Chairman Özgür Akın said the factory has already started mass production, which distinguishes it from similar factories elsewhere in the world.

The company’s new-generation human-robots – named “Ada GH5” – will be programmed for use at malls, fairs, airports, hospitals and even in homes, Akın said.

AkinSoft, which started operating in 1995, has around 2,000 solution partners in 28 countries and is regarded as the pioneer of software in Turkey.