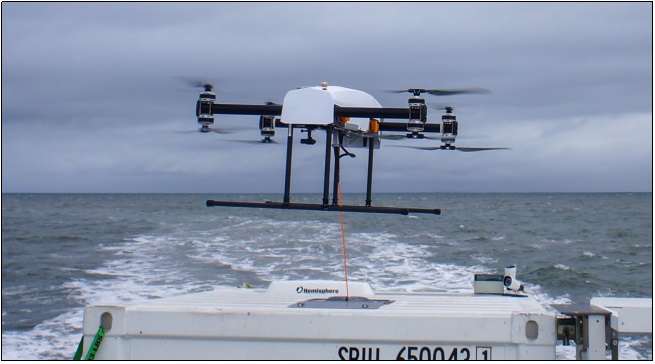 Fixed-wing Drones offer the ability to traverse airspace at high speed, but they are not equipped for applications requiring stationary aerial flight, which is especially important for persistent airborne surveillance and communication applications.

Early experimentation with tethered, unmanned blimps exposed the fundamental challenge which was their relative inability to remain stationary in high-wind conditions.  A new approach was needed, and Dragonfly Pictures Inc. (DPI) developed a new class of drone, the hover-in-place tethered drone.

Unlike battery powered multirotor drones which require battery changes every 20 minutes, tethered drones receive their power through an electrical cord connected to a base station.  This enables them to stay aloft for hours, even days.  DPI’s tethered multi-rotor drones are designed to track and follow mobile host platforms including ships, boats, trucks and other unmanned surface/ground vehicles.

They offer several benefits over fixed-wing drones, including vertical takeoff and landing capabilities. There is no runway, launcher or recovery equipment required. Unlike a blimp, they also offer the ability to achieve persistent, stationary positioning – even during turbulent weather and fast-changing wind speeds.

Tested extensively in real-world operating conditions, their tethered drones are currently being qualified for use by the U.S. Navy in marine/maritime environments for intelligence, surveillance, reconnaissance (ISR), communications and video applications.

UMAR drones are especially beneficial in that they can provide up to 400+ hours of non-stop uptime and operations – at up to 500 feet altitude – because of the continuous power flow through the tether. But there are significant design challenges inherent to the tethered architecture. The power needs to be delivered from the host vessel to the multirotor drone at extremely high voltage and low current to enable the use of the thinnest, lightest tether, which in turn enables greater drone mobility and larger airborne payloads.

Operating at power levels from 8 to 10kW, the UMAR drones are extremely powerful and ruggedized to maintain persistent stationary positioning under severe maritime storm conditions. This challenge is often compounded by turbulent waters/waves impacting the positioning of the host vessel. The drones therefore require the power capacity and agility to accelerate rotor speeds for lift and yaw in short or prolonged bursts as needed to maintain altitude with instant response time.

Within the multirotor drone, the high-voltage conversion must be achieved in the smallest possible footprint and light-weight profile. The eight independent rotors onboard the UMARs require sophisticated, interconnected PCB circuitry, so any space savings enabled at the power component layer can be repurposed for other value-add components.

“Using Vicor power modules we have been able to lower the weight of all the components onboard the drone to increase altitude and airspeed while carrying the required mission payload,” said Joe Pawelczyk, Vice President of Operations at DPI.  “Nobody else really has the power density of Vicor, so we can achieve top levels of maneuverability, performance and hover control with their components. This enables DPI tethered drones to lift more, fly higher and fly faster. “

When deployed as an airborne RF antenna, the UMAR drones can extend ship radio line-of-sight from 8 miles to up to 30 miles.

To meet these aggressive power challenges, DPI is leveraging the Vicor High-Voltage  BCM® VIA™ low-profile modules within its UMAR to enable high-efficiency conversion (98%) with only 2% losses and heat from 800V to 50V. The compact footprint and mounting versatility of the  BCMs were particularly valuable for achieving an extremely power-dense and lightweight s on-board system.

There are eight Vicor  high-voltage BCM4414 modules arrayed in parallel to power the DPI UMAR’s eight independent rotors, with the ability to share power among the rotors for increased redundancy. The inherently low EMI signature with few high-frequency harmonics, combined with integrated EMI filtering within Vicor  BCMs helped to minimize EMI noise adding less size and weight than conventional dc-dc converters. Left unfiltered, this noise could compromise RF communications between the drone and host vessels and/or fail to meet EMI standards.

In addition to its current trial deployments with the U.S. Navy, DPI technology is being evaluated by a host of government agencies, contractors and other entities and has shown significant promise for additional applications like disaster relief first-responders and large-area monitoring (public events, stadium security, etc.).