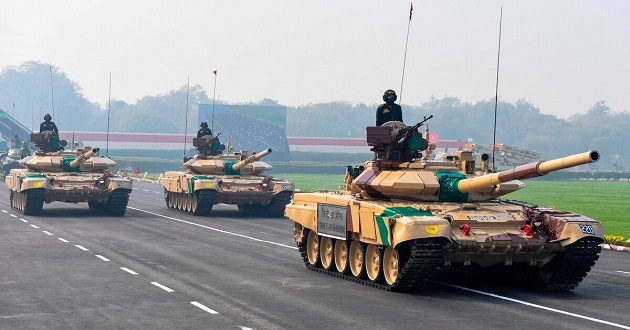 The capital expenditure in the defence budget has been effectively increased by meagre 0.4 per cent as compared to last year’s spending, instead of said 19 per cent, as the armed forces spent Rs 23,000 crore over and above the original budget allocation of 2020-21.

The capital expenditure fund, which is meant to procure big-ticket weapons, fighter jets, submarines, helicopters and other modern military systems, has been increased from Rs 1,13,734 crore last year to Rs 1,35,060 crore – a near 19 per cent hike. However, during the Ladakh standoff with China, a lot of emergency purchases were made. This revised the last year’s actual capital expenditure to Rs. 1,34,510 crore. So, effectively there is a very marginal increase in capital outlay meant for procuring new equipment.

REVISED EXPENSES AMID CHINA AGGRESSION
While it was the Indian Army holding fort at the Ladakh borders during the tensions that started last year in May, the jump in revised expenditures for 2020-21 of the Navy and Air Force was much more.

Last year, the Indian Air Force’s original allocation was overshot by Rs 11,773 crore and the Navy spent Rs 10,854 crore over their budget. In comparison, the Army spent Rs 821 crore above its allocation.

The defence ministry also carried out extensive construction work on borders last year, following the India-China standoff. While the estimated budget for the civil work was Rs 14,500 crore, it increased to Rs 15,914.06 crore as the government spent on building infrastructure in border areas.

OTHER EXPENSES
The allocation of pension for defence personnel in the latest budget is Rs 1.15 lakh crore as against revised allocation Rs 1.25 lakh crore, last year. This is because, last year, approximately Rs 18,000 crore pension arrears were to be paid, officials said.

Apart from that, the allocation for civil works under the Ministry of Defence is Rs 15,257 crore as against revised allocation Rs 15,914.06 crore in last year’s budget. The civil allocation includes an allocation for construction of roads, bridges, government aid to state governments and housing in North East regions and border areas.

NON-LAPSABLE FUNDS FOR DEFENCE
The Finance Commission’s proposal of a non-lapsable fund for the defence sector has been accepted in principle but the modalities need to be worked out.

Finance Minister Nirmala Sitharaman said, “In principle, we have accepted that but what formulation that will take will be different. That is something the ministry will have to work out.”

It is had been reported earlier that the Ministry of Defence had proposed a roll-on non-lapsable budget over a period of five years for big-ticket acquisitions.

It is proposed that a fund of Rs 2.38 lakh crore will be available for a period of five years 2021-26 that will not lapse. The fund can be used for modernisation of forces, capital investment for central armed police forces and also state police forces.