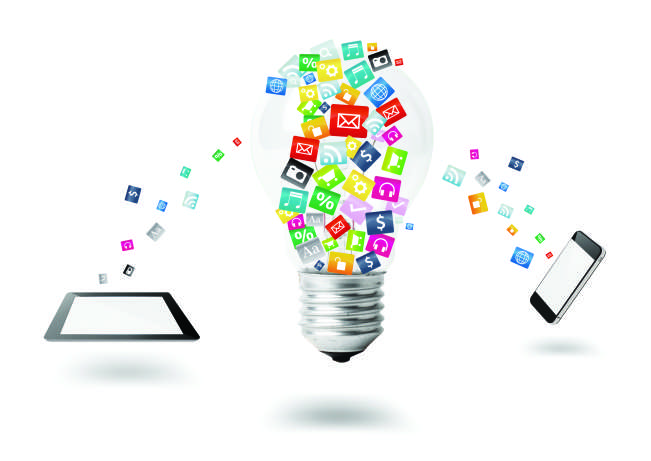 Keeping in view the contemporary theories, light is acknowledged as the fastest medium. This fastest medium is about to provide us an internet network that would give data speed of 224 gigabits per second. Yes, we are talking about Li-Fi.

Light Fidelity or Li-Fi is a Visible Light Communications (VLC) system that runs wireless communications travelling at very high speeds. As our hunger for faster data is ever swelling, imagine a technology which allows one to download data at 200 + gigabits per second speed.

It contains a photo-detector for receiving light signals and a signal processing element then converts the data into ‘stream-able’ content.

How does it work?
The LED light bulb is a semiconductor light source, so it means that the constant current of electricity supplied to a LED light bulb manipulated up and down at extremely high speeds. This is processed at such a speed that human eye cannot detect the difference.

The data is supplied into the LED light bulb, enabled with signal processing technology, which then sends the embedded data in its beam at swift speed to the photodetector or photodiode. This tiny variation in the rapid dimming of LED bulbs is then converted by the ‘receiver’ into electrical signals.

The signal is then converted back into a binary data stream that is recognized by the electronic devices as web, video and audio inputs, running on internet devices.

The visible light communication (VLC) technology theory dates back to the 1880s, is about any utilisation of visible light portion of the electromagnetic spectrum to transmit information. It functions on visible light between 400 and 800 terahertz (THz). Similar to an incredibly advanced form of Morse code – where switching a torch on and off in a certain pattern can relay a secret message, flicking a LED on and off at extreme speeds can be used to write and transmit things in binary code.

How did it begin?
The Li-Fi technology has been discovered by Professor Harald Haas, Chairman of Mobile Communications in University of Edinburgh, who coined the term Li-Fi during a TED Talk show, in Scotland, in 2011.

Harald disclosed his vision of “Wireless data from every light”, i.e. by flickering light from a single LED, far more data could be transmitted than from a cellular tower. This means that LED light bulbs will then be turned into super-speed broadband wireless Internet systems

After four years of research, in 2012, Haas co-founded the company ‘pureLiFi’ with the aim ‘to be the world leader in Visible Light Communications technology’. ‘pureLiFi’, formerly ‘pureVLC’, is an original equipment manufacturer (OEM) firm set up to commercialise Li-Fi products for integration with existing LED-lighting systems.

Usage & Applications
The trial phase of Li-Fi has already been initiated in offices and industrial environments. After the application of Li-Fi in Tallinn, Estonia, it has been reported that data transmission can be achieved at 1 GB per second speed – which is 100 times faster than current average Wi-Fi speeds.

pureLiFi has already shelved out two products on the market: Li-Flame Ceiling Unit to connect to a LED light fixture and Li-Flame Desktop Unit which connects to a device via USB, both aiming to provide light and connectivity in one device.

With such incredible connectivity and data transmission, Li-FI will provide interesting legroom for commercial purposes. With IoT devices and Li-Fi teaming-up, a wealth of opportunities for retailers and other businesses alike will see the dawn. Retailers could now transmit data to multiple customers’ phones quickly, securely and remotely.

It has been reported that Apple will soon introduce iPhones with Li-Fi capabilities.

“We are doing a few pilot projects within different industries where we can utilise the VLC (visible light communication) technology,” Deepak Solanki, CEO of Estonian tech company, Velmenni said.

“Currently we have designed a smart lighting solution for an industrial environment where the data communication is done through light. We are also doing a pilot project with a private client where we are setting up a Li-Fi network to access the Internet in their office space.”

‘We are going to connect our coffee machine, our washing machine, our toothbrush. But you can’t have more than ten objects connected in Bluetooth or Wi-Fi without interference,’ said Suat Topsu, founder, and head of Oledcomm.

Li-Fi v/s Wi-Fi
Li-Fi with its 224 gigabits per second might be the fast hare in the race of data transmission, leaving Wi-Fi behind, however certain cons still gives the Wi-Fi edge ahead of Li-Fi.

As it is about transmitting data through visible light, Li-Fi signals are debarred from penetrating through opaque surfaces. This would require any premise to have LED bulbs throughout all spaces where connectivity is required. Not to mention, Li-Fi requires the light bulb to be ON at all times to provide connectivity. Unlike public Wi-fi services, Li-Fi is limited to only that spot where LED lights are present and are ON. In simple words, when the LED is ON, the signal transmitted is a digital 1 whereas if it is OFF, the signal transmitted is a digital 0.

However, these technical limitations seem minor to the remarkable speeds, that is certain to make a huge impact on the IoT phenomenon too, connecting more and more devices with data transferred at such higher levels.

And due to its limited reach, for certain purposes, Li-Fi are a more secure option than Wi-Fi, i.e. less room for interferences between devices, making it impossible for hackers to virtually enter any internal systems in high-security establishments.

To speak more of its speed efficiency, it is reported that embedded light beams reflected off a surface could still achieve 70 megabits per second.

Speaking about the limitations of WI-Fi, US Federal Communications Commission has warned of a probable spectrum crisis as Wi-Fi is coming close to full capacity. Analysts have predicted that IoT devices will soar to 50 million in just four years, and the short supply of radio waves used for Wi-Fi will become crowded.

Li-Fi has almost no limitations on capacity. The visible light spectrum is 10,000 times larger than the entire radio frequency spectrum.

Researchers have reached data rates of over 224 Gbit/s, which is much faster than typical fast broadband in 2013. Li-Fi is expected to be ten times cheaper than Wi-Fi.

“All we need to do is fit a small microchip to every potential illumination device and this would then combine two basic functionalities: illumination and wireless data transmission,” Haas said. “In the future, we will not only have 14 billion light bulbs, we may have 14 billion Li-Fis deployed worldwide for a cleaner, greener, and even brighter future.”

In October 2011, the Li-Fi Consortium was formed by the companies and industry groups, to promote high-speed optical wireless systems and to overcome the limited amount of radio-based wireless spectrum available by exploiting a completely different part of the electromagnetic spectrum.

However, this doesn’t indicate that Li-Fi will completely replace Wi-Fi in the coming times. The endeavor is to work together with the two technologies, to achieve more efficient and secure networks.

According to Gartner chief analyst Jim Tully, Wi-Fi will continue to evolve and improve its own capabilities, and this could determine how the role of Li-Fi moulds in.

It is estimated that by 2019, roughly 35 quintillion bytes of information every month will be generated and exchanged globally. With the escalating demand for faster and more efficient wireless networks, with IoT knocking and entering the communication threshold, the future is bright for Li-Fi as a reliable, affordable and more secure solution.

Commercial Endeavors
Apart from companies like PureLiFi and French firm Lucibel, there are many others who are working on developing LiFi technology: