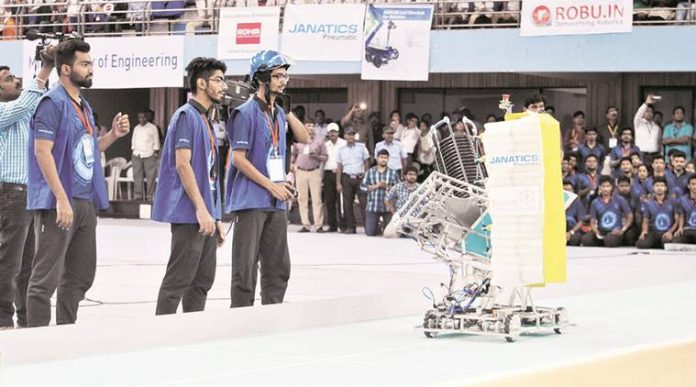 ROHM Semiconductor was a proud partner of the prestigious Robocon India 2017 for the fourth consecutive time. Organized by Doordarshan and MIT Academy of Engineering, Robocon India 2017 was held from 2-4 March at the Balewadi Sports Complex, Pune. This 3-day event witnessed teams from 112 engineering colleges from across India vying for the top spot. The theme for Robocon 2017 was ‘Asobi- The Landing Disc’.

ROHM strongly believes in and is committed towards the development of technology that can contribute to the advancement of culture & society and reach out to the youth who are the future flag-bearers. To that end, ROHM encourages and supports activities like Robocon which not only promote industry-academic partnership but also provides a much-needed encouragement to young, aspiring engineers.

College of Engineering Pune (COEP) came out as winners to win the coveted Robocon India trophy and the team will now represent India at the Asia-Pacific contest, “ABU Robocon 2017” to be held in Tokyo in August this year. MIT-Pune was the first runner-up, and the all-girls team Vadodara College of Engineering was the second runner-up.

Mr. Daisuke Nakamura, Managing Director, ROHM Semiconductor India presented the Award to captains of each of the quarterfinalist teams.  Robocon India 2017 saw a stupendous display of energy, talent, creativity and competitive spirit, on the field and off the field. ROHM also organized a ‘Smart Ideas for Smart Nations’ contest and received an overwhelming and innovative response from the students at Robocon.

For the more detail, visit http://www.rohm.com/web/in/