Can Green Hydrogen Become the World’s Most Sustainable Source of Energy? 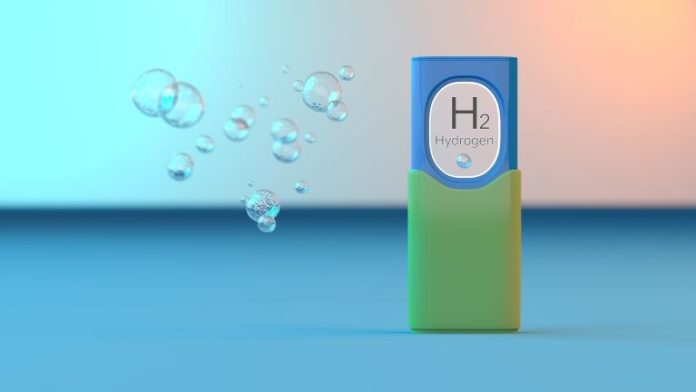 Energy, as the laws of physics state, can be neither created nor destroyed; it can only be transformed. This makes the term “renewable energy” something of a misnomer and it should, perhaps, be renamed inexhaustible energy. That, again, needs some context. Conceptually, the continuous transformation of an inexhaustible source of energy into useful work seems somehow more achievable – and entirely more sustainable – than the idea of using energy that constantly renews itself.

Renewable energy tends to be synonymous with what are, for all practical reasons, inexhaustible sources of energy. These comprise the sun, the wind, and the tides of the seas. As transforming energy requires even more energy, it makes sustainable sense to use a source of energy that is effectively inexhaustible, because it doesn’t really matter if the efficiency of transforming energy into work is low.

In a world that could moderate its energy consumption based on supply, transforming natural energy sources into work would be the most sustainable way of living. But, long ago, human ingenuity successfully harnessed other forms of exhaustible energy. That created a dependence on energy that has only increased over time. The supply of energy transformed from inexhaustible sources cannot currently meet this demand, but things are changing.

The trouble with inexhaustible energy

The reason why energy sourced from solar, wind or wave is still not our only source of energy is complex. It would be fair to say that the technology isn’t mature enough, or that the efficiency is too low. Other observations, like cloud cover and the uncontrollable nature of the wind are valid, too.

Cost is a major factor and it cannot be ignored. But if we do ignore it for a moment, the problems don’t just go away. The energy infrastructure has developed in relation to the demand. That includes every stage between the turbines (however they are turned) and the socket in your wall. Demand is the pertinent word here because people expect power to be available on demand and in abundance.

This focuses the lens on the real issue with inexhaustible power, which is storing it until it is needed. There are numerous ways of transforming these sources of energy into electricity as a continuous process. We have yet to develop an effective way of storing the raw sources of energy, so any electricity generated must be used or stored.

Battery technology is the obvious solution to this problem. There is a lot of research going into developing batteries that provide higher energy density, lower leakage and faster operation. The challenges associated with this are well understood and include the need for rare earth metals or the use of toxic chemicals. Mining these materials is also becoming a challenge. 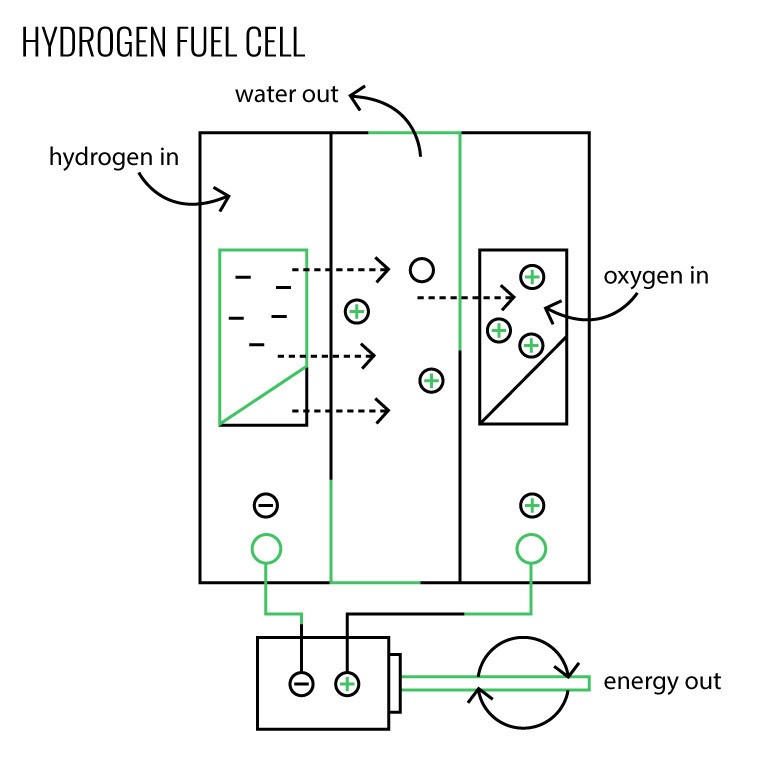 When combined in a fuel cell, hydrogen and oxygen generate electricity and water, which makes the electrolyzer a critical part of the system.

In reverse order, the Carbon Negative Shot encourages new concepts around reducing the cost of capturing and storing carbon, at scale, at a cost of less than $100/net metric ton of CO2-equivalent (CO2e). The Long Duration Shot is aimed at achieving a 90% reduction in the cost of storing clean energy for 10+ hours (using lithium-ion batteries as a baseline), within a decade. This shot directly addresses the challenge outlined above, of storing unused electricity generated from an inexhaustible source of energy.

In gas form, hydrogen is relatively easy to store and transport. In recent times most of the hydrogen generated is used in industrial applications and not as a fuel. If it is to become a dominant source of energy, production will need to increase. In today’s hydrogen economy, its generation isn’t particularly environmentally friendly, so increasing production using exiting methods could compound the problem of greenhouse gas emission.

Moving dependency onto electricity generated from stored hydrogen will only move the problem to hydrogen creation. The cart that must come before that particular horse is mastering hydrogen generation, storage and transportation.

As well as generating clean electricity (and water) using a fuel cell, hydrogen can also be burned in much the same way other gasses are used in turbines. There is also potential for hydrogen to be used as fuel in an internal combustion engine, but this is a less efficient way of using hydrogen, and it produces nitrogen oxides when burning.

The color of hydrogen

Most hydrogen today is extracted from methane, which also releases carbon. This is known as grey hydrogen, but if the carbon is captured and stored it is referred to as blue hydrogen. Hydrogen that uses fossil fuels in the process is generally known as black or brown hydrogen.

If the primary energy source used is nuclear based, the hydrogen is commonly and, apparently, interchangeably referred to as pink, purple or red hydrogen. A relative newcomer, turquoise hydrogen, is made using methane pyrolysis, which creates hydrogen and solid carbon. This has the potential to be a low-emission process if the energy for the heat needed comes from a renewable source. It could also be possible to capture and store the solid carbon more economically.

Naturally occurring hydrogen is sometimes called gold or white hydrogen, but it isn’t believed to occur in large amounts or be easy to find and mine. That leaves hydrogen created through electrolysis using the inexhaustible sources as the primary energy. This includes using only solar power, known as yellow hydrogen, or using any combination of renewable sources producing no greenhouse gases in the process, which is what we now call green hydrogen.

Despite being invisible, hydrogen comes in various colors.

The tide is turning on green hydrogen

There are many examples of companies developing technology to generate or use hydrogen as a clean energy source. There is potential, under the term of green hydrogen, to use renewable energy to power the electrolysis process. The hydrogen could then be stored and combined with oxygen to produce electricity on demand, whenever needed.

Conceptually, this could result in a self-contained system that harnesses natural resources to generate electricity. The electrolyzer will be one of the many critical parts in the system, and they come in various forms including polymer electrolyte membrane (PEM), alkaline and solid oxide electrolyzers.

With an abundant source of water available, using tidal energy to generate hydrogen from sea water makes a lot of sense. The Tidal Hydrogen Production Storage and Offtake project (THyPSO) does just that. Two companies, Tocardo and HydroWing, have worked together to prove the concept. The platform stores the hydrogen it produces using its bidirectional tidal turbines. Up to two weeks worth of hydrogen can be stored onboard until it is transferred to an offtake vessel through a pressurized hose. 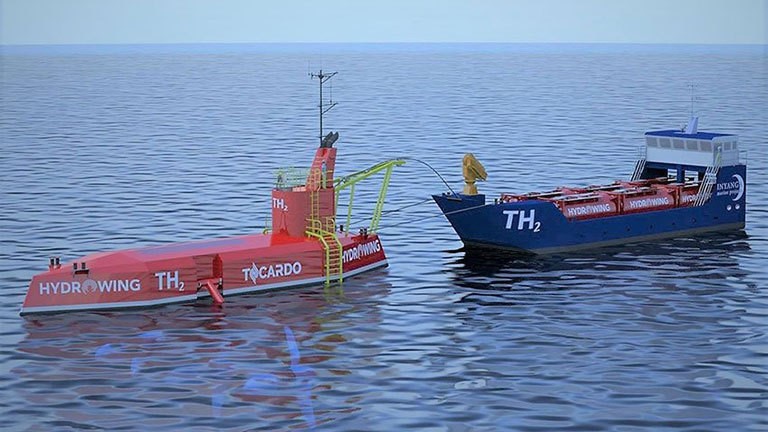 The THyPSo is a proof of concept for green hydrogen generation in a closed system using tidal power and sea water to generate hydrogen, which is stored on-board before being taken off by a support vessel.

Many innovators are working on new types of hydrogen electrolyzers, but the process generally needs a high DC current.

If grid power is being used to power the electrolyzer, then it needs to be AC coupled and rectified to DC. The options here are many, but Infineon recommends one of the simplest, the thyristor. A thyristor solution is lower cost and less complex than using an IGBT module, it also offers high power density. As a line-commutated device, the same solution can work with any line frequency, but it will contain harmonics.

An alternative solution would be a diode rectifier coupled to an IGBT circuit for DC/DC conversion. This approach would reduce harmonics in the DC used to power the electrolyzer. It would also provide a more flexible driver, to accommodate different modes of operation or operating conditions. However, for high current rectifiers of 20MW or above, thyristors are still the suggested approach.

Avnet carries the full range of power management solutions from Infineon, covering low and high power. This includes the OptiMOS™ power MOSFETs offered in a PQFN package using Infineon’s Source-Down technology. This involves flipping the silicon inside the package, so the source is connected to the PCB over the thermal pad rather than the drain. Other low-power solutions include the StrongIRFET and OptiMOS 5 and CoolMOS power MOSFETs, as well as the CoolGaN gallium nitride power MOSFETs. 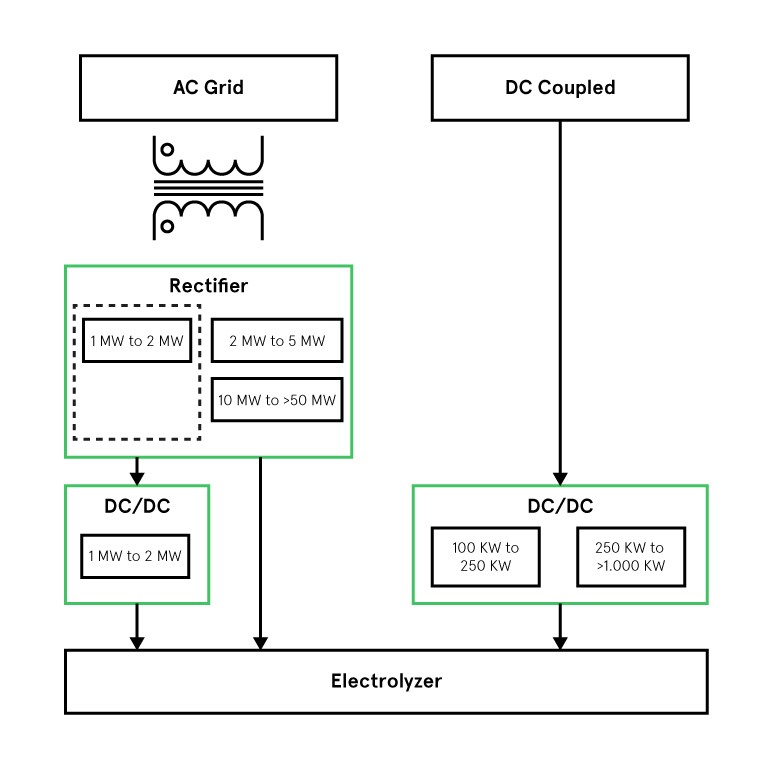 A hydrogen electrolyzer requires high power DC, which can be generated from an AC source or DC-DC coupled from a renewable energy supply. 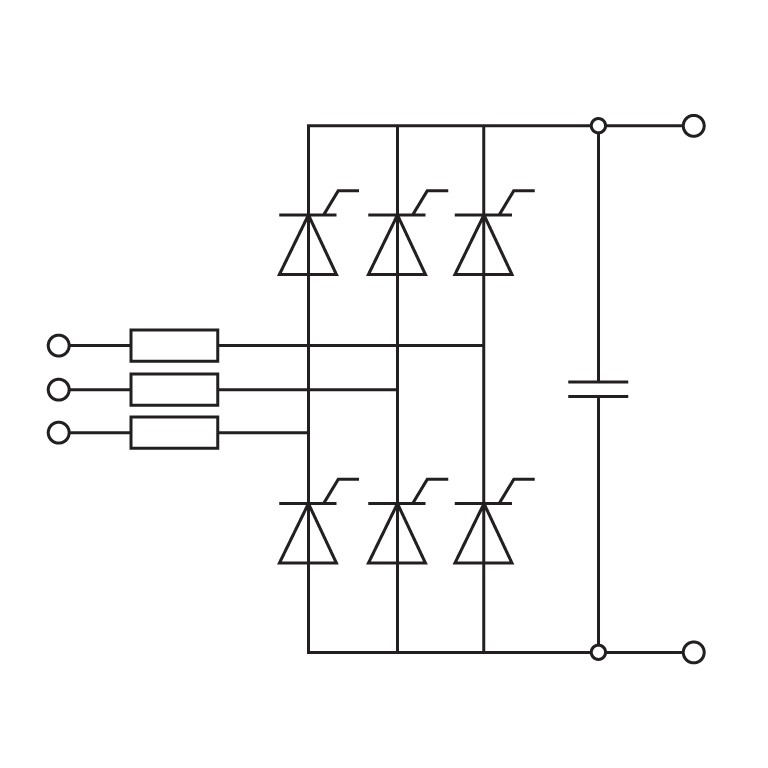 Thyristors provide a simple but effective way of rectifying AC to DC in a hydrogen electrolyzer, but they offer little flexibility and harmonics will be present at the output. 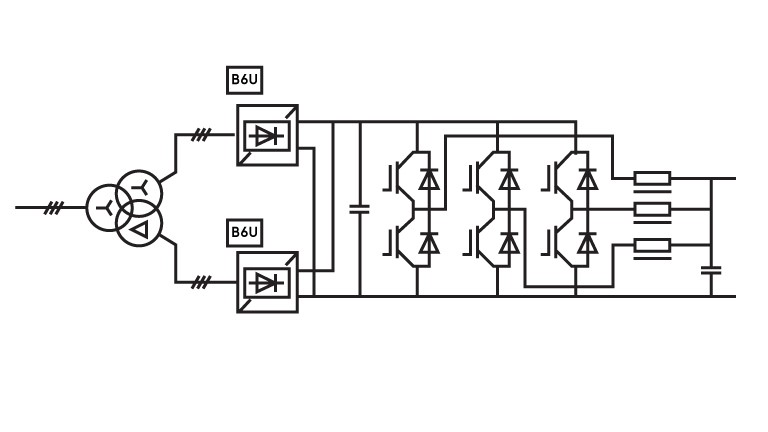 Green hydrogen holds a lot of promise, but there are many hurdles ahead. The hydrogen ecosystem is not currently geared toward its use as a green fuel, but it could be. It would require investment at every stage, and this is where the real challenges come.

Alongside this, innovators large and small continue to move forward, developing and improving the underlying technology that will be needed as and when the rest of the ecosystem catches up. At the current rate of change, that should happen soon.