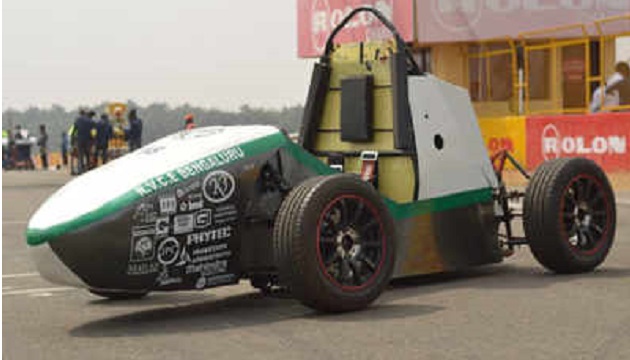 After the hybrid vehicles, the latest in the host of innovations by students of RV College of Engineering is a single-seater electric race car which can vroom from zero to 75 metres in five seconds and touch a maximum speed of 120 kmph.

Operating under the banner of Team Chimera founded in 2006, the latest product in the college stable was built from the scratch, students claim and can cover a distance of 40 km at a racing speed once it is fully charged. It will take the car around four hours to be fully charged.

“We are one of the first colleges in the country to successfully transcend to the automobile sector of hybrid and electric technology,” said Dr Shanmukha Nagaraj, a professor at R V College of Engineering, Mysuru Road.

The electric race car was one of the main attractions at the three-day Electric Vehicle Technology Expo (EV South EXPO) that began at Chandragupta Maurya Playground in Jayanagar on Friday.

“It took us a year and Rs 12 lakh to come up with a fully electric race car weighing around 250 kg, excluding the driver,” said Shrikesh S, team captain of Chimera. “Our focus switched from hybrid to electric as we believe that electric is the future. This car was designed and built by students on the college premises,” he added.

A private firm is offering battery-operated vehicles, costing Rs 1.2 lakh, to collect segregated waste from households. Sahil Sharma, director of Haryana-based Arzoo Vehicles, said: “Each hydraulic garbage loader can carry waste of 350 kg-700kg; it will have provision to collect wet and dry waste separately.” The company is in talks with BBMP to operate these vehicles in Bengaluru. Once charged, it can run up to 100km for 6-8 hours,” Sharma said.