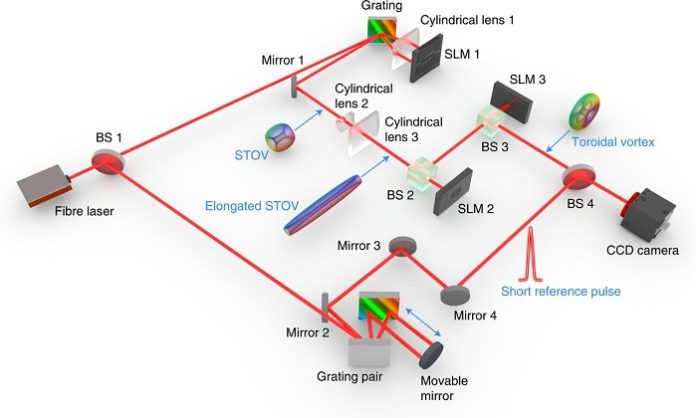 A team of researchers from the University of Shanghai for Science and Technology and the University of Dayton has developed a way to bend light into a vortex ring using mirrors, lasers, and lenses. The group built on work done by other teams in which vortex rings were observed incidentally, and then mathematically designed a system that could generate them on demand.

In 2016, another team of researchers discovered that under the right circumstances, strong pulses of light swirling around a central pipe-shaped pulse could sometimes form into a donut-shaped vortex. Intrigued by the finding, the researchers with this new effort began to wonder if it might be possible to create such vortex rings on demand.

They started by studying the properties and conditions that had led to the formations observed by the team in 2016 and applied mathematics to the problem. They found solutions that appeared to show how such rings could be made—solutions to Maxwell’s equations, in particular, they found, could be used to generate the kind of conformal mapping required.

The researchers put together a combination of materials that would lead to the real-world implementation of their math solutions. They started by modifying a standard laser to generate a specific type of pulse. They added mirrors, lenses, gratings, and special types of liquid crystal screens for the pulses to pass through. Each of the parts impacted the light in a specific way.

The researchers note that the system first changed the pulses of light into a long, narrow shape, which gave other parts of the light something to swirl around. After the other light traveled through the system, the swirling light joined, like winds in a tornado, forming a ring.

The researchers plan to continue their work, hoping to learn whether other vortex shapes can be made. They note that their work could provide blueprints for others looking to better understand the formation of toroidal vortices that form naturally.