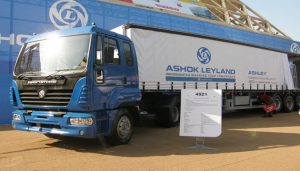 The two other bus plants of Ashok Leyland, the flagship company of the Hinduja Group, are located at Trichy in Tamil Nadu and Alwar in Rajasthan. The new plant is expected to further augment capacity and play a bigger role in strengthening its electric vehicle-manufacturing capability, reported the Hindu Business Line.

The ground-breaking ceremony, performed in the presence of Andhra Pradesh Chief Minister Nara Chandrababu Naidu, marked the start of the project at Model Industrial Park, Mallavalli village, in Krishna district, about 45 km from the upcoming capital city of Amaravati.

Expecting to see more than ₹25,000 crore investments by about 6-7 companies in the automotive sector, Naidu said: “The sector will boost the prospects of local youth and create a number of ancillary industries and attract other companies to the State.”

This region is seen as the next upcoming manufacturing hub in Krishna district. The Ashok Leyland plant will be spread over 75 acres, with a further capacity to add another 75 acres to the plant site to pave way for expansion.

“The plant, which is likely to a see an initial investment of ₹170 crore, may entail another investment of about ₹170-200 crore at a later phase,” Vinod K Dasari, MD & CEO, Ashok Leyland explained. Apart from making the entire range of buses of Ashok Leyland, the facility will include an electric vehicle development centre comprising a futuristic conveyor line, pilot assembly line and prototype development, Dasari explained to Hindu Business Line.

“We are looking at huge unfolding opportunity for EVs in the country. Our first batch of EV buses will be deployed in Ahmedabad where we have bagged the contract for 40 EV buses,” said Dasari to Hindu Business Line.

SiC Diodes market to have remunerative opportunities with increasing sales of...

Electric Cars in India Could Soon Become a Common Sight as...