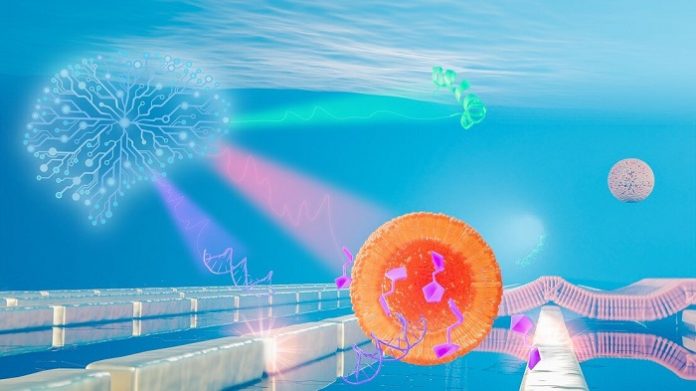 The tiny world of biomolecules is rich in fascinating interactions between a plethora of different agents such as intricate nanomachines (proteins), shape-shifting vessels (lipid complexes), chains of vital information (DNA), and energy fuel (carbohydrates). Yet the ways in which biomolecules meet and interact to define the symphony of life are exceedingly complex.

Scientists at the Bionanophotonic Systems Laboratory in EPFL’s School of Engineering have now developed a new biosensor that can be used to observe all major biomolecule classes of the nanoworld without disturbing them. Their innovative technique uses nanotechnology, metasurfaces, infrared light, and artificial intelligence.

To each molecule its own melody

In this nano-sized symphony, perfect orchestration makes physiological wonders such as vision and taste possible, while slight dissonances can amplify into horrendous cacophonies leading to pathologies such as cancer and neurodegeneration.

Tuning into this tiny world and being able to differentiate between proteins, lipids, nucleic acids, and carbohydrates without disturbing their interactions is of fundamental importance for understanding life processes and disease mechanisms.

Light, and more specifically infrared light, is at the core of the biosensor developed by Altug’s team. Humans cannot see infrared light, which is beyond the visible light spectrum that ranges from blue to red. However, we can feel it in the form of heat in our bodies, as our molecules vibrate under the infrared light excitation.

Molecules consist of atoms bonded to each other and—depending on the mass of the atoms and the arrangement and stiffness of their bonds—vibrate at specific frequencies. This is similar to the strings on a musical instrument that vibrate at specific frequencies depending on their length. These resonant frequencies are molecule-specific, and they mostly occur in the infrared frequency range of the electromagnetic spectrum.

If you imagine audio frequencies instead of infrared frequencies, it’s as if each molecule has its own characteristic melody. However, tuning into these melodies is very challenging because, without amplification, they are mere whispers in a sea of sounds. To make matters worse, their melodies can present very similar motifs making it hard to tell them apart.

The scientists solved these two issues using metasurfaces and AI. Metasurfaces are man-made materials with outstanding light manipulation capabilities at the nanoscale, thereby enabling functions beyond what is otherwise seen in nature. Here, their precisely engineered meta-atoms made out of gold nanorods act like amplifiers of light-matter interactions by tapping into the plasmonic excitations resulting from the collective oscillations of free electrons in metals.

AI is a powerful tool that can be fed with more data than humans can handle in the same amount of time and that can quickly develop the ability to recognize complex patterns from the data. AI can be imagined as a complete beginner musician who listens to the different amplified melodies and develops a perfect ear after just a few minutes and can tell the melodies apart, even when they are played together—like in an orchestra featuring many instruments simultaneously.

The first biosensor of its kind

When the scientists’ infrared metasurfaces are augmented with AI, the new sensor can be used to analyze biological assays featuring multiple analytes simultaneously from the major biomolecule classes and resolving their dynamic interactions.

These Scientists looked in particular at lipid vesicle-based nanoparticles and monitored their breakage through the insertion of a toxin peptide and the subsequent release of vesicle cargos of nucleotides and carbohydrates, as well as the formation of supported lipid bilayer patches on the metasurface.

This pioneering AI-powered, metasurface-based biosensor will open up exciting perspectives for studying and unraveling inherently complex biological processes, such as intercellular communication via exosomes and the interaction of nucleic acids and carbohydrates with proteins in gene regulation and neurodegeneration.