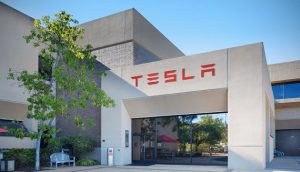 Three Indian component makers namely Sandhar Technologies, Bharat Forge, and Sona BLW are said to be supplying auto components to Tesla the American electric car maker that is often seen as the company that will reinvent the future of mobility.

As per the Factor Daily report, for Indian component makers, being one of the suppliers to Tesla opens up doors for new business in the fast-growing electric vehicles market expected to more than triple to $350.9 billion by 2023.

A Tesla car has fewer parts compared to any of the vehicles made by Ford or General Motors, which means the company has lesser component suppliers compared to the incumbents. Tesla sources components from hundreds of suppliers in US, Europe and Asia.

To be sure, the rise of electric vehicles threatens to disrupt traditional component makers as these vehicles require fewer parts. Take for instance how Tesla’s new electric truck affects component maker Bharat Forge. The truck, which will likely go into production by 2019, doesn’t need a crankshaft that transmits power out of the engine. As this Economic Times report points out, if the global truck industry moves towards electric trucks, Bharat Forge, which gets nearly 44% of its revenues from selling truck components (of which half is from selling crankshafts), will see its business shrink.

Sandhar Technologies makes two kinds of components, including wiper systems, for Tesla cars, said a third source. He added that Sandhar might not be selling directly to Tesla, but to a tier-I supplier of Tesla, who makes the entire wiper system for the vehicles.

Bharat Forge has been selling some forging parts to Tesla, which are not part of the electric powertrain, the first source said. These products are not exclusive for EVs or Tesla, but for every product, it needs to pass Tesla’s design and quality benchmark. A forged auto part is something that is usually made by using plastic dies.

Sona BLW also supplies forged parts that go into making suspension systems for Tesla. The parts are not very different from what goes into an IC engine car but the suspensions need to be lighter for electric cars, explains the second source. Making the vehicle lighter increases the range of the EV, and that is done by changing the components.

Electric cars can likely be charged at homes and offices soon