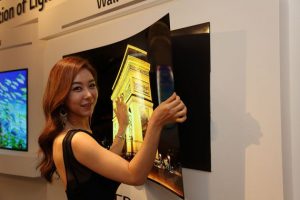 LG recently unveiled a concept television design that, if produced, would be the thinnest ever. The 55-inch OLED display is barely 1mm wide — about the width of a DVD. The display weighs just over 4 pounds, and attaches to your wall via a mounted magnetic mat. The entire display can be “peeled” off the magnet. This opens up the possibility of having multiple magnetic mounts in a home, allowing you to easily move the device from room to room. Getting tired, but still want to see the end of your movie? Just peel off the display from your living room wall, and stick it on the bedroom wall.

Manufacturers are able to produce televisions this thin by using OLED (Organic Light Emitting Diode) technology. Organic LEDs emit light whenever an electrical charge is applied to them. In televisions, this means you no longer need layers of backlighting, which dramatically reduces the weight and depth required to produce the brightness levels necessary for a viewable image — hence this latest, wallpaper-thin variation. OLED TV sets have darker black levels, and improved brightness and contrast control, with smoother transitions between light and dark scenes. And LG uses WRGB technology, which adds an extra white pixel to the red, green, and blue, to offer more color variations and better off-axis viewing.

All that said, we’ve never seen a set this thin before. It remains to be seen how cables will connect to it. We can envision a breakout box type connector with a mini-plug on the TV — or more aesthetically, perhaps the cables will connect to the magnetic mat from inside the wall, using contacts on the back of the set to provide video and power sources.

As we mentioned above, this particular model isn’t available yet, but LG expects to have it on store shelves, or walls, in 2017. Pricing hasn’t been determined, but LG’s currently available 55-inch OLED model 55EC9300 can be had for $2,499 in retail stores or Amazon, and on the high end, the company’s larger, curved, 4K OLED 65EC9700 runs $8,999. Samsung also has some stunning OLED HDTVs as well, though at the moment it seems LG has set its sights on becoming the market leader in OLED display technology, currently producing more models than any other manufacturer. LG executive vice president Yeo Sang-deog said that LG is ramping up OLED production this year, with sales goals of 600,000 in 2015 and 1.5 million in 2016.

As with many consumer electronics categories, thin is in for televisions. Sony, Samsung, and Sharp all offer LED sets that are just 1 to 3 inches thick. When making a new purchase, it usually comes down to which set offers the best looking picture. OLED TV’s have an edge here as well, albeit at a significant price difference at this time. Look for prices to come down as more OLED displays hit retail stores. And while that wallpaper-thin LG set isn’t available yet, something tells us it’s only a matter of time before other manufacturers try the same thing.