MENUMENU
Home Technology Artificial Intelligence and Automation: Will it be the cause of Human Decline? 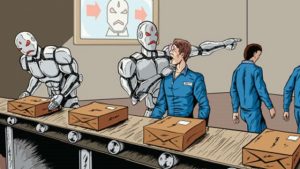 Technology is often considered as a boon for world as it makes task easier, quicker and it comes with new technological advancements.  Artificial Intelligence and Automation is now seen in every sphere of life, whether in form of assistance or in form of smart industries but does it really beneficial to human beings? The answer is already given by many scientist and technocrats, the growing technology does not guarantee growing human development.

Increasing contribution of robotics in automation industry has already replaced the human labor which is becoming the reason for inequality and risk of political upheaval.  Earlier where on an average 500 workers were needed now they have been reduced to 2 digit number. Steven Hawkings has raised his voice for the growing concern of machines replacing humans. We are seeing only present but future is devoid of human workforce as now artificial intelligence is serving the purpose of assistance which has already shown the signs of unemployment.

Earlier technology has eaten traditional manufacturing with an introduction to robotics in smart factories, but now it is affecting the middle class also. A report published by Citibank and University of Oxford that 47% of US jobs are at risk of automation. In the UK, 35% are. In China, it’s a whopping 77% — while across the OECD it’s an average of 57%.

According to Hawking though the progress has been made  but it is socially destructive also. The widely used internet and its related platforms have benefitted few number of people with large profits while employing less.  Though the technology has raised our standard of living but simultaneously reduced the ability to earn.

Growing advancement of AI and automation have not only affected the employability but indirectly supported overpopulation, climatic changes, diseases. The solution for these problems given by Hawking is Humanity should be together. He has already predicted that development in AI will be the end of human race as it will automate itself while humans have to depend on biological evolution.

Mouser honored with third consecutive distributor of the year award...

The TVU One Mobile Transmitter with Embedded Quectel 5G Module Is...