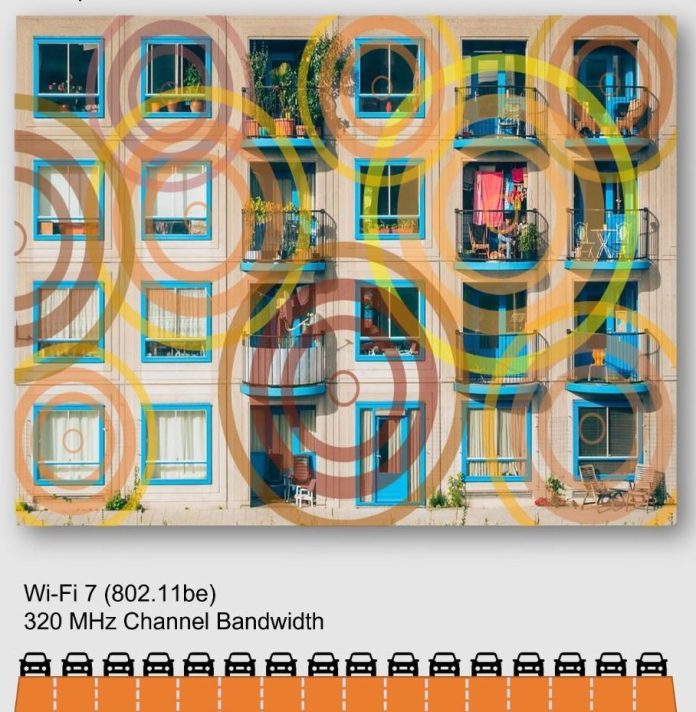 Hot on the heels of Wi-Fi 6E, the 7th generation Wi-Fi technology, also referred to as IEEE 802.11be or Wi-Fi 7, is just around the corner! It will be the fastest Wi-Fi technology ever and a game-changer, providing a much better user experience for networking and online activities in our everyday life. It will enable and accelerate many demanding applications such as 8K video streaming, full immersion AR/VR, gaming, and cloud computing. This article will review the key features supported in 802.11be Release 1 and understand the benefits of Wi-Fi 7 and how it can enable future connectivity.

Quadrature amplitude modulation (QAM) is used extensively as a Wi-Fi modulation scheme that simultaneously mixes both amplitude and phase variations in a carrier. Wi-Fi 6 supports up to 1024 QAM—each constellation point on the left represents 10-bit data (symbol) in Figure 2. Wi-Fi 7 supports 4096 QAM—each constellation point on the right represents 12-bit data (symbol). In other words, each point modulated with QAM in Wi-Fi 7 can carry 2 bits of more information than Wi-Fi 6. That is a 20% increase in speed. 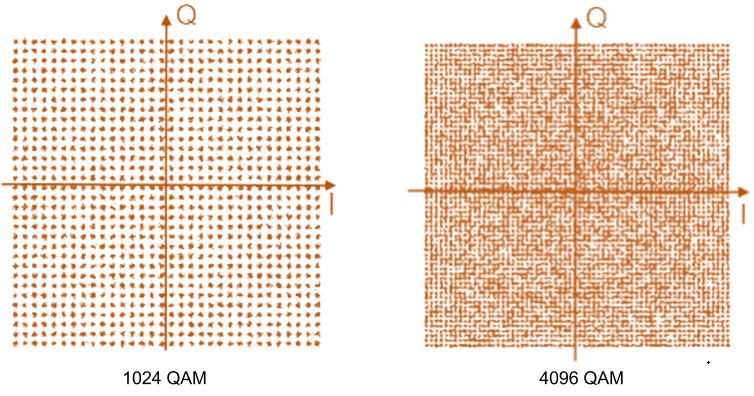 Multi-link Operation (MLO) is a vital and helpful feature in Wi-Fi 7. It enables devices to transmit and receive across multiple bands and channels simultaneously. It is similar to but more sophisticated and flexible than the link aggregation or trunking features of wired (i.e., Ethernet) networking. It creates a bundling or bonding of multiple links (radios) in different bands and channels to work as one virtual link between the connected peers. Each link (radio) can work independently and simultaneously with other links or coordinate for optimal aggregate speeds, latency, range (coverage), or power saving. Wi-Fi 7 MLO is a MAC-layer solution for concurrently using multiple links and is transparent to the higher-layer protocols and services. MLO can improve throughput, link robustness, roaming, interference mitigation, and reduce latency. 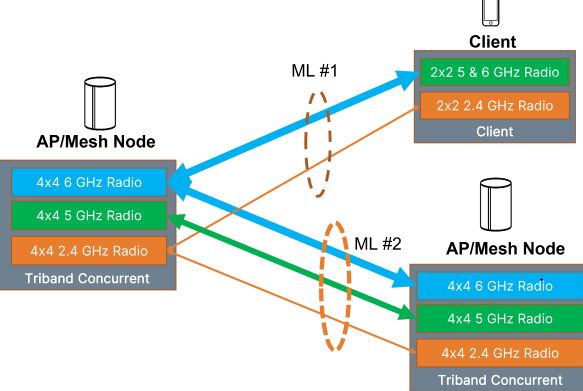 For example, in a home mesh network formed with triband (6 GHz, 5 GHz, 2.4 GHz) mesh nodes or access points (APs), MLO can form a high-speed, low-latency wireless backbone for the home network and provide backhaul for the devices connected to the mesh nodes/APs. If each mesh node supports 4×4 triband concurrent configuration, the aggregate backhaul (backbone) supports speeds up to 21.6 Gbps. With MLO, the backhaul (backbone) is also more robust and reliable. If the 5 GHz link is interrupted by radar (DFS), the traffic can be automatically switched to the 6 GHz and 2.4 GHz links without service interruption or quality of service (QoS) degradation. Compared to Wi-Fi 7 MLO-based backhaul, today’s Wi-Fi 6 and 6E mesh solutions use one of the 4×4 radios to form the wireless backhaul, which only provides 4.8 Gbps speeds. If there is interference or interruption to that link, the whole backhaul (backbone) is impacted or broken, thus causing QoS degradation or interruption.

When the client devices, such as smartphones, laptops, etc., support multiple radios, MLO creates a larger pipe between the devices and AP for higher speeds, lower latency, and higher reliability and improves the user experience for seamless roaming.

Such MRU mechanisms support both orthogonal frequency division multiple access (OFDMA) and non-OFDMA (i.e., MU-MIMO) modes. OFDMA mode supports small MRUs and larger MRUs to allow more flexibility to allocate the RU/MRUs without complicating the MAC and scheduler designs. The non-OFDMA mode provides the most flexibility in the preamble puncturing of subchannels.

For example, any 20 MHz subchannels except for the primary one or 40/80 MHz channels can be punctured in 320 MHz bandwidth. This allows the transmission to maximize the utilization of the spectrum of the channel when there is interference and provides the best coexistence if there is an incumbent device operating on a specific spectrum section of the channel.

There are many new features and improvements in Wi-Fi 7. Such features include preamble puncturing, target wake time (TWT) and restricted TWT (rTWT), extended-range (MCS 14 and MCS 15), etc. Other features such as multi-AP coordination (coordinated beamforming, coordinated OFDMA, coordinated spatial reuse, joint transmission), 16 spatial streams, and HARQ, etc., may be supported in Release 2 and are not covered in this article.

How Will Wi-Fi 7 Benefit End Users?

Wi-Fi 7 supports lightning-fast speeds. Built on its predecessor, Wi-Fi 6 (a.k.a. 802.11ax), Wi-Fi 7 supports extremely high throughput (EHT) with a raw data rate of up to 46 Gbps with 16 spatial streams defined in the standard specs. This is much faster than the 10 Gbps Ethernet running on Cat 6/6a/7 cables. The closest access and connectivity technologies are Thunderbolt 3/4, USB 4, and HDMI 2.1, which provide 40 Gbps or higher maximum raw data rate.

With such extremely high speeds, users can get maximum multi-gigabits (5.8 Gbps) per second speeds for commonly used devices such as smartphones, laptops, etc., with two Wi-Fi antennas (two spatial streams). Due to stringent power or form factor constraints, many devices using one antenna can also support a data rate up to 2.9 Gbps. Users can get more than 2x speeds without paying for additional antennas or higher electricity bills because no additional power amplifiers or front-end modules are needed—a paradigm shift for many applications down the road.

Latency is another critical parameter for quality of service (QoS) and user experience. It is particularly pivotal for real-time applications. Many multimedia applications such as high-resolution real-time video streaming, virtual reality, augmented reality, cloud gaming, and real-time programming require less than 20 ms latency. It is not easy to achieve such low latency in a wireless environment. The latency on the WAN side is roughly 10 ms or slightly longer between the modem and the cloud/server for fiber optics access. After considering that, the latency budget between the WAN modem and the endpoint client device should be about 10ms or less to achieve a great user experience. Wi-Fi 6 achieves 10-20 ms latency. And Wi-Fi 6E can achieve lower latency in a much less contentious environment. Wi-Fi 7 will help bring down the latency to the sub–10 ms and eventually sub-1 ms realm with deterministic boundaries by utilizing various tools in the 802.11be standards. These tools include MLO, TWT, and rTWT, improved triggered transmissions, and ultimately integrated time-sensitive network (TSN) features.

As mentioned above, MLO provides a dynamic mechanism to adapt the connection among multiple links. MLO can dynamically balance the transmission load on the connection between two link peers (e.g., AP and client device) based on metrics such as link quality for performance and robustness, a.k.a load balancing. If there is interference or link loss (e.g., due to range) on one of the links, the connection can still operate on the remaining links, and the transmission can seamlessly switch over from the failed link to the good links (a.k.a. fast failover). MRU/RU and preamble puncturing also facilitate the connection robustness. For instance, when interference happens on specific subchannels or a particular section of the spectrum of the operating channel, the AP can avoid using those interfered subchannels or RU/MRUs and optimize the transmission based on the current environmental situation and channel status. In addition, MCS 14 and MCS 15, which are defined to boost signal SNR, also improve the robustness of the connection when the distance between the link peers extends.

Wi-Fi 6 and Wi-Fi 6E already enhance many features for interference mitigation and coexistence with incumbent equipment, on top of Wi-Fi 5. Wi-Fi 6 provides more flexible subchannel puncturing patterns and can leverage RU in OFDMA mode to avoid interference at a more granular level, as detailed as 2 MHz (smallest RU with 26-tones). Wi-Fi 6E supports automatic frequency coordination (AFC) for coexistence with incumbent equipment. Wi-Fi 7, with MRU and utmost flexibility of preamble puncturing features that support all possible subchannel and high-resolution puncturing patterns in both OFDMA and non-OFDMA (MU-MIMO) modes, provides much better interference mitigation, with optimal QoS for different types of services.

MLO also improves the user experience for seamless roaming. It provides built-in roaming enhancement features defined in the 802.11be standards. For example, when the device moves farther from the AP, MLO retains the ML (multi-link) connection between the AP and device and may automatically operate on the 2.4 GHz band without switching bands. Vice versa, if the device moves closer to the AP, MLO can automatically and dynamically operate on the 5 GHz and 6 GHz bands for higher performance. Today’s Wi-Fi 6 and 6E APs must rely on band steering or client steering features at the application layer to forcefully steer the client to different bands. It does not always work as expected because the AP has no control over the client devices; the client devices decide to switch bands or not. Besides, compatibility among vendors is another considerable challenge for seamless roaming.

By leveraging the higher speeds, thanks to wider 320 MHz channel bandwidth, 4096 QAM, and lower latency, Wi-Fi 7 delivers data with much higher power efficiency. Built on Wi-Fi 6 power-saving features, Wi-Fi 7 improves these features in many ways for optimal power savings.

In addition to TWT, the most promising power-saving feature in Wi-Fi 6, Wi-Fi 7 supports the so-called triggered transmission opportunity (TXOP) sharing feature to further power saving. It allows an AP to allocate a portion of the time within an obtained TXOP to an associated client device for transmission so that it does not need to wake up in the next service period (SP).

With 2x or 4x oversampling and upsampling techniques, RTT timestamp and measurement accuracy can be in the sub-nanosecond resolution for 320 MHz signals. That is to say, Wi-Fi 7 supports sub-meter (i.e., 30 cm) accuracy for ranging and indoor positioning, and it will enable many exciting new Wi-Fi sensing applications.

Wi-Fi 7 will significantly improve user experience in many ways and become more economically efficient. It can enable and enhance many demanding applications, such as cloud gaming, immersive AR/VR, 8K video streaming, Industry 4.0, etc. Users can expect much higher speed, lower latency, and more robustness from Wi-Fi 7 than what existing Wi-Fi 6/6E can provide.