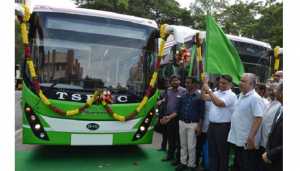 The first lot of five electric buses were flagged off in the city on and are part of the contract for deployment of 40 AC electric buses that TSRTC has awarded Olectra-BYD.

The remaining 35 electric buses will be deployed in due course, the company said. These vehicles are manufactured in India by Olectra Greentech (formerly Goldstone Infratech) in a strategic tie-up with BYD Auto Industry Co. of China.

The department of heavy industry, Union ministry of heavy industries and public enterprises, has, under the Faster Adoption and Manufacturing of Hybrid and Electric vehicles in India (FAME-I) scheme, provided a subsidy of Rs 1 crore for each bus to Telangana.

The lithium-ion (Li-ion) battery installed in the bus enables it to travel up to 250 plus km in a single charge.

“Olectra-BYD is doing its bit to reduce the increasing pollution levels. Our buses plying under TSRTC are yet another step in the same direction and we are sure to repeat the success of our electric buses in other states,” N Naga Satyam, Executive Director, Olectra Greentech Limited said.

Allegro demonstrates the future of its groundbreaking automotive and high-efficiency power...

Achieve the Highest Automotive Functional Safety Grade with only one Sensor...