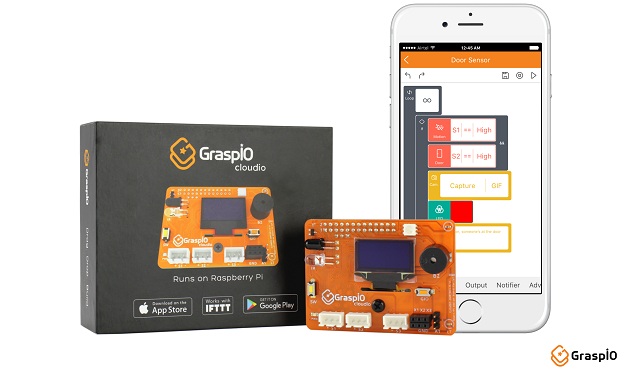 element14, the Development Distributor, recently announced the launch of GraspIO Cloudio – a Raspberry Pi add-on board with Drag and Drop programming interface on iPhone, iPad, Android. element14 has been working very closely with GraspIO for the last 3 years to take their initial product idea of a Pi Hat that made prototyping and coding as easy as possible, and turn it into a marketable, scalable, sellable product.On the side-lines of the launch, Hari Kalyanaraman, Global Head of Emerging Business, element14, spoke to ELE Times about how element14 works towards enabling innovative companies to design advanced products and provide them with end to end support and also talk about the product and its applications in detail.

ELE Times: element14 has come out with GraspIO Cloudio. Please tell our readers more about it?

Hari Kalyanaraman: Graspio Cloudio is a Raspberry PI add-on board that makes it easy for anyone to prototype and build IoT applications. The Cloudio comes feature packed with a light sensor, temperature sensor, proximity sensor, 1 inch OLED display, a buzzer, an RGB LED, a switch and expansion ports for adding more sensors and servo motors. It supports IFTTT, so you can create applets with triggers and actions based on the Cloudio’s features. The OLED display comes with stylized fonts and emojis, so you can create fun responses to triggers. A highlight of the Cloudio is its intuitive block-based drag and drop mobile programming interface. To get started, you can download the GraspIO Studio app on iOS and Android and start creating projects in minutes.

ELE Times: What are the expectations you are having with the launch of GraspIO Cloudio?

Hari Kalyanaraman: Graspio Cloudio is a good fit with our existing Raspberry Pi customers as well as our community members. We have the world’s largest online engineering and maker communities in element14.com and Hackster.io with close to 1 million members collectively. The Cloudio enables beginners and experts alike to quickly build IoT projects. I am looking forward to seeing how this is received by our community of makers, hobbyists, innovators and engineers.

ELE Times: Which applications and markets are you targeting with the product?

Hari Kalyanaraman: The Cloudio lends itself well to a wide variety of IoT applications such as home automation, robotics, voice control and image capture, all with custom notifications and IFTTT support.

You can connect a servo or more sensors through the expansion ports. The Cloudio is perfect for anyone looking to create IoT projects quickly and easily without a complicated set up or configuration.

ELE Times: What is the immediate future scenario of UI devices which includes, virtual assistants, voice commands and what role does GraspIO Cloudio play in it?

Hari Kalyanaraman: The voice enabled virtual assistant market has exploded over the past 2 years and industry reports indicate this segment will continue to grow at a fast clip. The virtual assistants thus far have found the most traction in the consumer segment whether it is smart households or personal lifestyle assistants. The Graspio Cloudio connects to Amazon Alexa and Google Home as well as smart devices like Philips Hue, Fitbit and more.

ELE Times: It is said the Raspberry Pi has leapfrogged from being a hobbyist tool to a potential Business tool.

Hari Kalyanaraman: A strong feature set combined with a powerful processor, an attractive price point, a large install base and a vibrant community of developers has made the Raspberry Pi very appealing in commercial and industrial applications. We see the Raspberry Pi being used in diverse systems and products ranging from IoT gateways to underwater drones, electric scooters, STEM toys, retail solutions, computer vision, high performance clusters and more. The Cloudio makes some of those capabilities accessible to beginners with no prior coding experience.

ELE Times: What are the strategies to promote the product in India?

Hari Kalyanaraman: We envision a multi-channel approach in conjunction with active community engagement through projects, design contests, webinars and discussions, in promoting this product.