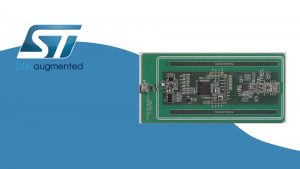 STMicroelectronics has combined its ST25R3911B NFC reader IC and STM32L476RE ultra-low-power microcontroller in a Discovery kit, ST25R3911B-DISCO, accelerating time to market for contactless applications that deliver superior communication range, speed, and energy efficiency with simplified design and reduced bill of materials. The board provides a reference for RF circuit layout, and with the included STM32 MCU software, can be quickly up and running as an HF reader or NFC initiator.

The ST25R3911B RF receiver is approximately five times more sensitive than typical devices, while up to 1.4W output power allows extended range without requiring an additional amplifier. Automatic Antenna Tuning (AAT) enables OEMs to fine-tune the antenna settings of end-user equipment efficiently on the production line. In addition, the ST25R3911B is the only device on the market that enables a single-chip solution for Very High Bit Rate (VHBR) operation, which boosts download speeds from 848kbit/s to 6.8Mbit/s, making it ideal for applications such as eGovernment systems including passports.

The companion STM32L476RE ultra-low-power microcontroller on the Discovery kit board features the 80MHz ARM Cortex-M4 core with DSP extensions and floating-point unit, and achieves aggressive power savings through features such as smart architecture with FlexPowerControl, dynamic voltage scaling, and seven power-management modes with sub-mode options. An embedded memory protection unit enhances application security. The Discovery kit helps developers leverage the strengths of the MCU and reader IC together, and connects with the powerful STM32 ecosystem, including sample code, IP blocks, and expansion boards.

ST will launch its new NFC-reader discovery kit at Embedded World in Nuremberg, 14-16 March 2017, where a limited number of kits will be given away free of charge. The kit will be ready to order from distributors or from st.com after the exhibition, priced $49.