MENUMENU
Home Technology STLINK-V3: 3 Modules and 5 Reasons to Fall in Love with Them

The STLINK-V3 is a complete architectural overhaul of its in-circuit debugger/programmer for STM8 and STM32 microcontrollers (MCU). The new technology can transfer data faster and with a lot more flexibility, thanks in part to its STDC-14 connector and its support of a virtual COM port. At their core, the STLINK-V3SET, the STLINK-V3MINI, and STLINK-V3MODS, all of which house the STLINK-V3 technology, build on one fundamental lesson: users must be able to take advantage of the new architecture regardless of unexpected edge cases or new applications. The new in-circuit debuggers/programmer technology thus focuses on versatility thanks to a new interface, a powerful connector, and the presence of two modules to tailor our offerings to more developers.

The STLINK-V3SET came out in October 2018 while the STLINK-V3MINI is now making its debut onto the world’s stage with immediate availability on our website and online distributors. The former enables the addition of extension cards for a manufacturer’s suggested retail price of only $35, while the latter tailors to developers looking for some of the benefits of the STLINK-V3 and will cost about $10. When Professor Zhu, of the University of Maine, presented a curriculum teaching embedded systems to undergraduates with our drone kit, educators asked about the ST’s debugging tools. The drone kit is too small to integrate the STLINK interface, thus requiring an external module. The audience’s response to the STLINK-V3SET’s price was overwhelmingly positive, but the arrival of the STLINK-V3MINI now makes the new architecture even more attractive. Here are five additional reasons why.

The top of the STLINK-V3SET card

The previous generation of ST-LINK/V2 family of products remains highly popular and diverse. The first standalone device came out in 2011 and meant that developers could quickly and easily connect the in-circuit debugger/programmer between their board and their PC to compile their code, send their application to their MCU, benefit from unlimited breakpoints in RAM, and figure out if the system would run or if an error could cause problems. We know that the solution is highly popular amongst professionals and large engineering teams, which is why we will continue to sell and support our ST-LINK/V2 devices. We are deploying our new STLINK-V3SET and STLINK-V3MINI, but we also understand that some may want to continue to use something that’s familiar to them. 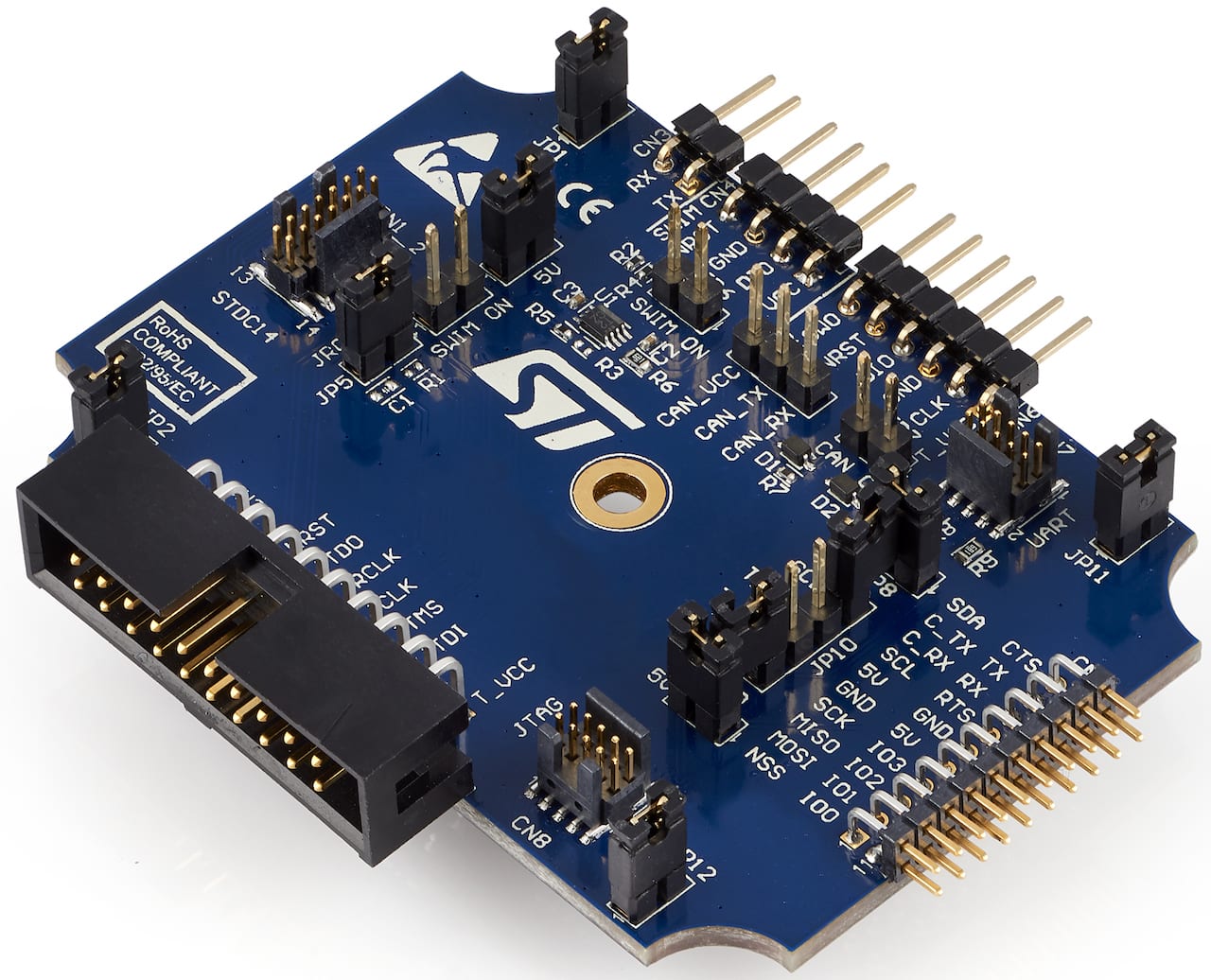 Furthermore, the family of ST-LINK/V2 products extends far beyond the standalone models as there are third-party variants with different form factors that remain quite popular. There’s also an ST-LINK/V2 directly integrated into our development solutions, like on the STM32 Discovery kits or Nucleo boards, which we optimized for the Serial Wire Debug (SWD) interface to ensure a small footprint. One of its features is the mass storage support that provides users the ability to open a storage volume on their PC to drag-and-drop binaries instead of going through an IDE to start uploading their application.

The case housing the STLINK-V3SET

The case housing the STLINK-V3SET [/caption] Data transfers are the bread and butter of this platform, which explains why the first significant architectural difference between the ST-LINK/V2 and STLINK-V3 is the latter’s compatibility with the USB 2.0 Hi-Speed interface. Previously, developers had to contend with a 12 Mbit/s USB 2.0 Full-Speed data rate, which could be cumbersome when uploading large applications. The latest modules now offer theoretical speeds of up to 480 Mbit/s, which will result in a drastically faster experience. Furthermore, beyond the simple interface upgrade, ST also implemented multiple optimizations of its algorithms and processes, making this a thorough architectural overhaul instead of a simple speed bump. Hence, the increase in productivity for teams that upload tremendous applications multiple times a day is highly noticeable. 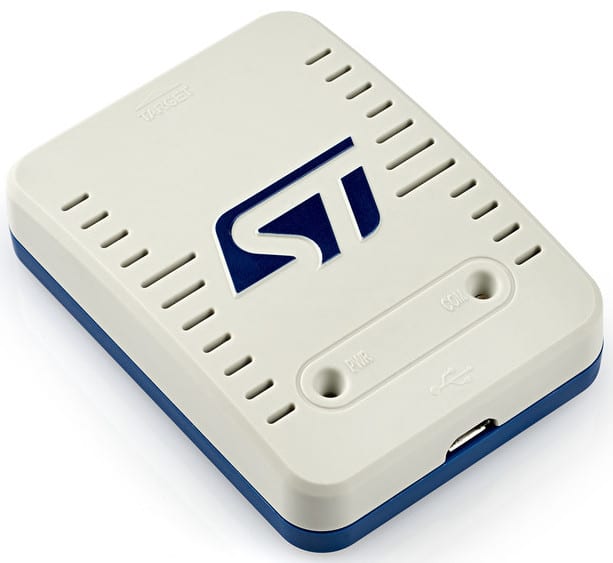 Beyond better speed, the STLINK-V3SET and STLINK-V3MINI offer mass storage support to allow for a much more convenient upload process. Until now, only the ST-LINK/V2 present on some of our development boards, such as all our Nucleo boards, offered this feature. However, with the new models, engineers will be able to connect the in-circuit debugger/programmer, then drag and drop binaries to upload them in no time. This is particularly useful for developers wanting to quickly experiment with a demo application on a custom PCB, and who would rather not have to compile their code and send it through their IDE. It also makes swapping demos far more convenient, especially when teams are in the field.

A split view of the STLINK-V3SET card and its case

The ST 14-pin debug, the STDC14, present on both STLINK-V3SET and STLINK-V3MINI is another reason for the modules’ flexibility. When users open their boxes, they will find the traditional MIPI 10-pin cable, which is relatively compact and very popular, and a new STDC 14-pin cable. The MIPI 10-pin version doesn’t support a virtual COM port. As a result, we developed an extension of the MIPI-10 connector that uses four additional pins to offer more features. 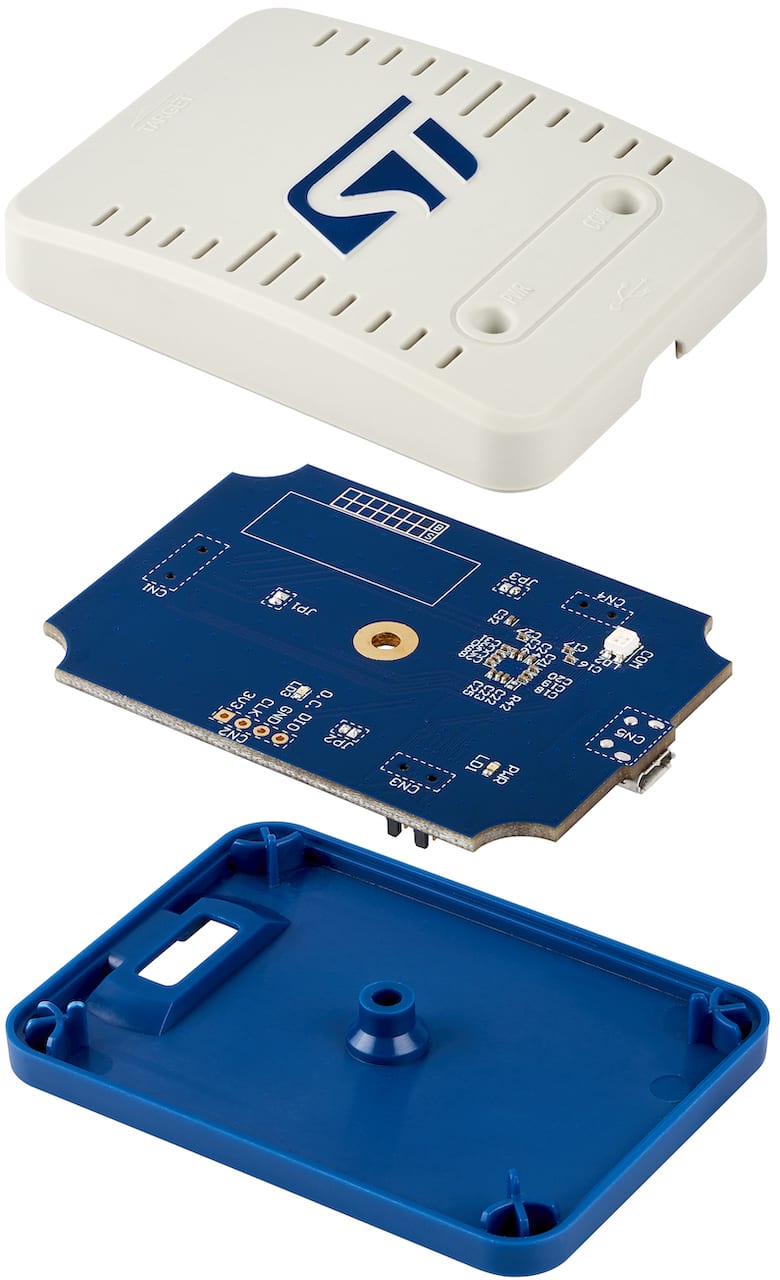 This is important because until now, engineers had to use extra cables and find workarounds to get a virtual COM port when they didn’t have the ST-LINK/V2 built into their development board. Thanks to the STDC-14 of the STLINK-V3SET and STLINK-V3MINI, using a virtual COM port is a lot more practical. Similarly, the in-circuit debugger/programmer opens the door to an entirely new set of features as it allows PC developers to drive a couple of GPIOs from the new ST-LINK thanks to the DLL API present in STM32CubeProgrammer. As a result, teams can potentially add LEDs that light up as a sign that a routine performs its job, control other peripherals, or even use proprietary extensions via these IOs.

The new architecture offers the same versatility as previous generations, with the possibility of using JTAG (Joint Test Action Group) and SWD for the STM32 MCUs. It also adds a tremendous level of flexibility with the possibility of using an STDC-14 connector to benefit from a virtual COM port. However, the new STLINK-V3SET goes even one step further with the ability to add extension cards on the debugger/programmer to increase its functionalities. 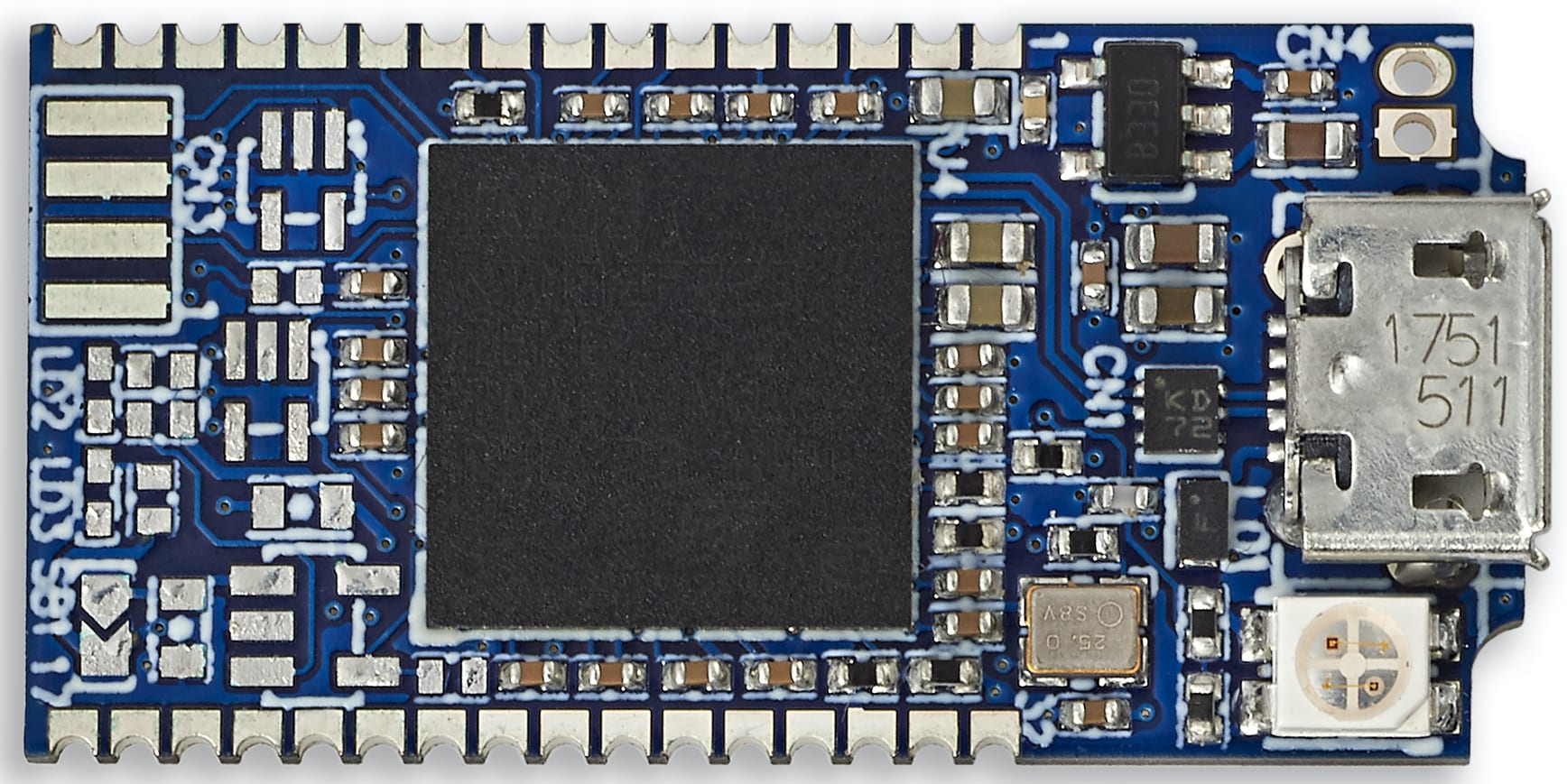 For instance, the complementary interface board allows developers to upload firmware through the SPI, IC, or UART interface, this extension card serving as a bridge between the target board and the PC. Using the STM32CubeProgrammer software tool, either in a command line or graphical interface mode, developers can seamlessly use this bridge in their environment to facilitate maintenance operations without leaving a debug port open, which can represent a severe security breach.

Another example is Percepio and its Tracealyzer for the STLINK-V3SET. Tracealyzer is the premier trace visualization tool for developers of RTOS-based software systems, providing over 30 graphical views and live visualization. Tracealyzer v4.2 integrates support for STLINK-V3SET, allowing for a comprehensive insight into STM32 software during development, debugging, validation, and optimization.

The STLINK-V3SET will attract developers with more extensive needs. The module comes with more cables as it is compatible with the larger and still useful MIPI-20 connector. It also has a height-adjustable casing that will adapt to the size of the stack present on top of the STLINK-V3SET so users can neatly house their extension cards. The STLINK-V3SET is also compatible with SWIM (Single Wire Interface Module) to ensure teams can program and debug an STM8. 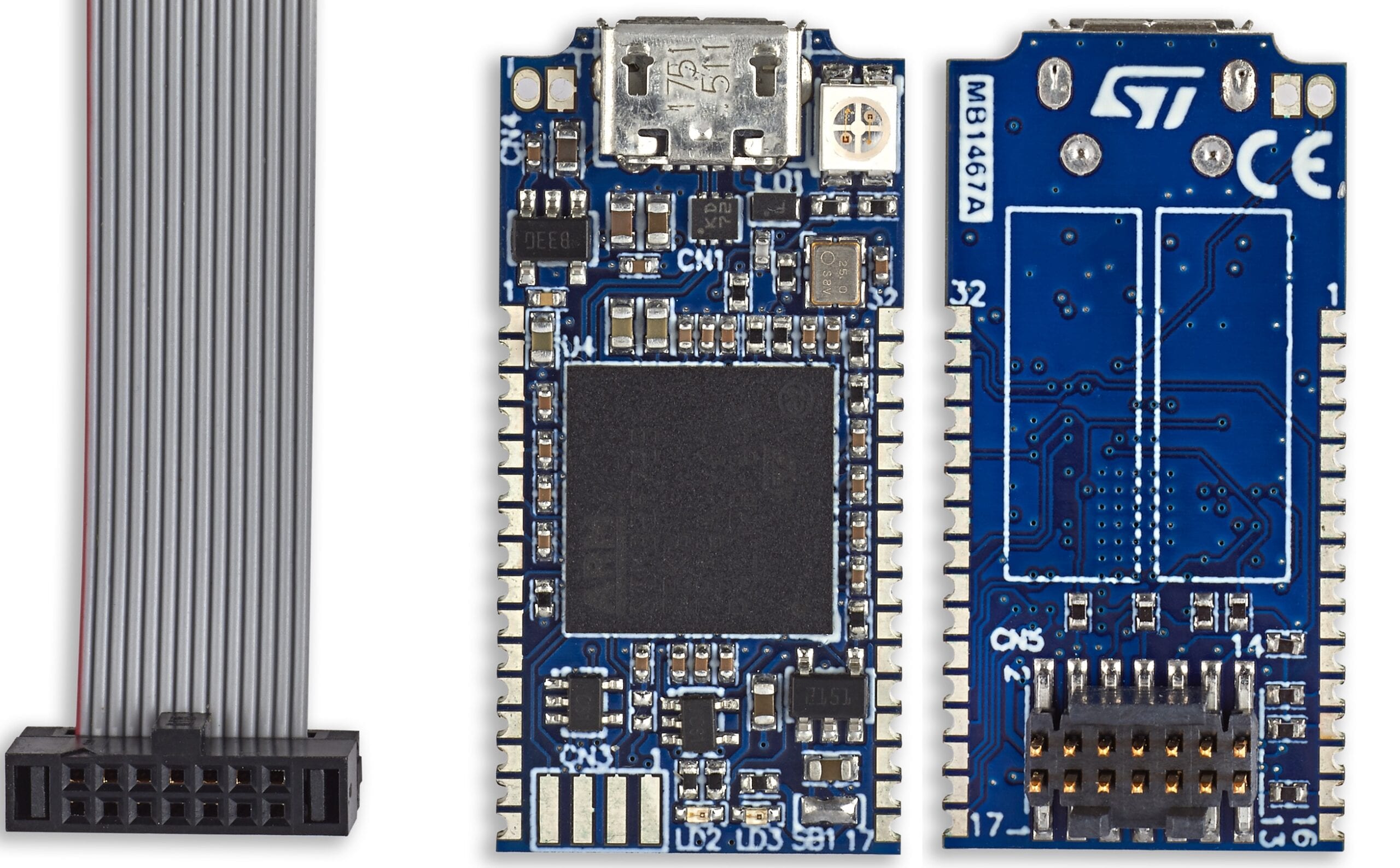 As a result, it is much larger than the STLINK-V3MINI, which is so small that it can fit in the palm of a hand, making it a delight when developers must carry them while touring show floors or in the field. In many of these cases, developers lose the need for the SWIM interface or the port for extension cards, but the module’s size and the weight become critical factors. Similarly, the STLINK-V3MODS is as small (15 x 30 mm) and engineers can directly solder it onto a PCB to vastly increase their prototype’s practicality. Hence, to have the ability to purchase a smaller, more cost-effective, and more pertinent system means scaling the STLINK-V3 architecture to better fit the wide range of engineers that use STM32 solutions.

Compliance technology will rely on artificial intelligence in the future