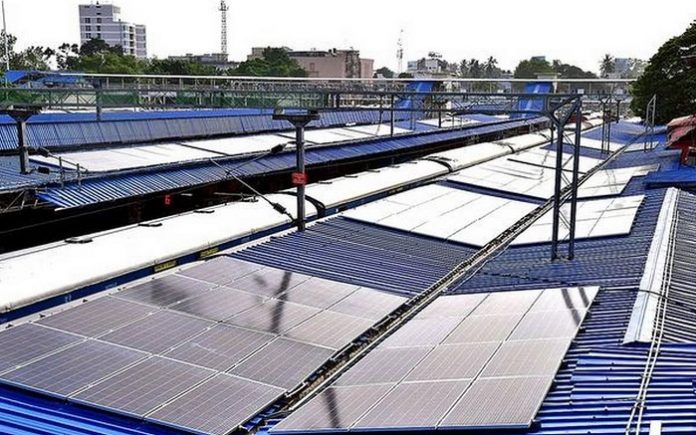 While tweeting a picture of the station, Union Railways Minister Ashwani Vaishnav informed that the station has installed a solar power capacity of 1.5 MW, and thereafter all the energy needs at the stations will be met by this solar power.

Setting the foot towards Green Railways

SCR is the first of many Indian Railway zones that has adopted the concept of ‘Energy Neutral’ railway stations. The Chennai Railway station is now capable of meeting its 100% energy requirements by solar power commissioned on its 13 station buildings.

Along with that, power panels have been installed at various locations and railway stations including the MMC complex, Tambaram, Mambalam, Katpati, and others.

To become the world’s largest green railway network, Indian Railways is now moving towards “net-zero carbon emission” before the year 2030. Earlier, on the occasion of World Environment Day 2021, the national transporter, in a statement had stated that the railways are moving towards a complete green restart.

In order to harness the extreme potential of Renewable energy, the railways is aggressively pushing towards the installation of solar-powered stations that will contribute to environmental protection.

In this regard, the recent achievement by SCR has already set a deep foot towards Indian Railways’ “Green Restart” goal.

India is on the verge of an “energy revolution” where major sectors of the economy are ramping up their technologies to cut carbon emissions while pushing sustainable development.

The country has a huge potential in Solar energy, which is undeniably the most abundant renewable energy source available in India. Being the third-largest energy consumer in the world, India needs a healthy mix of all commercial energy sources.

In this regard, Indian Railways already has 220 Megawatt (MW) capacity of RE power, with nearly 3,450 MW capacity in the pipeline. The Ministry states that it has a potential of 20 GW of solar power and is planning to utilise its vacant land parcels to set up land-based solar plants for its traction power requirement.

Currently, the Indian Railways is collaborating with several donor agencies and stakeholders to accelerate its low carbon journey. It has even signed a Memorandum of Understanding with United Kingdom’s Foreign, Commonwealth and Development Ofce (FCDO) for collaboration on energy and sustainability under its Power Sector Reforms Programme.

Indian Railways has also planned for the installation of a one-of-the-kind solar plus storage hybrid pilot project at Dahod, Gujarat connected to the railway traction network.

As per a report by the Ministry of Railways, 111 MW solar capacity has already been installed at rooftops of various stations and administrative buildings by January 2021, such as:

To conclude, India is on the right track when it comes to working towards Green Restart, and the Indian Railways is working in mission mode to achieve this goal with an aim to become a “net-zero carbon emitter” before 2030.