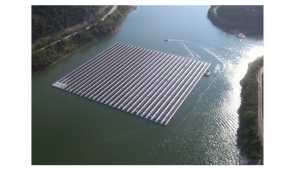 India’s first large-scale floating solar project is on its way with Shapoorji Pallonji winning the first block in Solar Energy Corporation of India’s auction of 150 MW of such projects on the Rihand Dam, along the Uttar Pradesh-Madhya Pradesh border. Shapoorji Pallonji won the reverse auction for 50 MW quoting a tariff of Rs 3.29 per unit, officials said.

“This is the country’s first floating solar project at such a scale,” said a Solar Energy Corporation of India (SECI) official. “There are a few others but they are in kilowatts.”

The remaining 100 MW will also be shortly auctioned in blocks of 50 MW, the official said. “We had considered bringing out such a tender two years earlier, but our initial inquiries showed tariffs would have been in the range of Rs 7-8 per unit, and so we decided not to go ahead,” the official said.

Since then, solar tariffs have fallen dramatically, with those of ground mounted projects dropping to Rs 2.50-3.50 per unit. In UP, where solar radiation is not as strong as in states like Rajasthan, the average tariff has been more than Rs 3 per unit.

A problem several solar developers face is that of connectivity and transmission of the power they produce as mostly solar projects come up in rural areas because they need vast amounts of land, around six acres per MW.

The Rihand floating projects will not have any such issues, and they can use the same transmission facilities as the hydropower station of the dam.

“Floating solar is a well-established model worldwide,” said Vinay Rustagi, managing director at solar consultancy Bridge To India. “It is really great that India has also gone forward with floating solar and that too at this size.”

He said the price discovered in the first reverse auction is 10% higher than ground-mounted projects in UP. “Given that transmission issues are less, the tariff is in line with expectations,” Rustagi said.

He, however, expressed concern that the timeline for the project, at just 13 months, could be a challenge. “Acquiring floating structures within this deadline might be difficult,” Rustagi said.