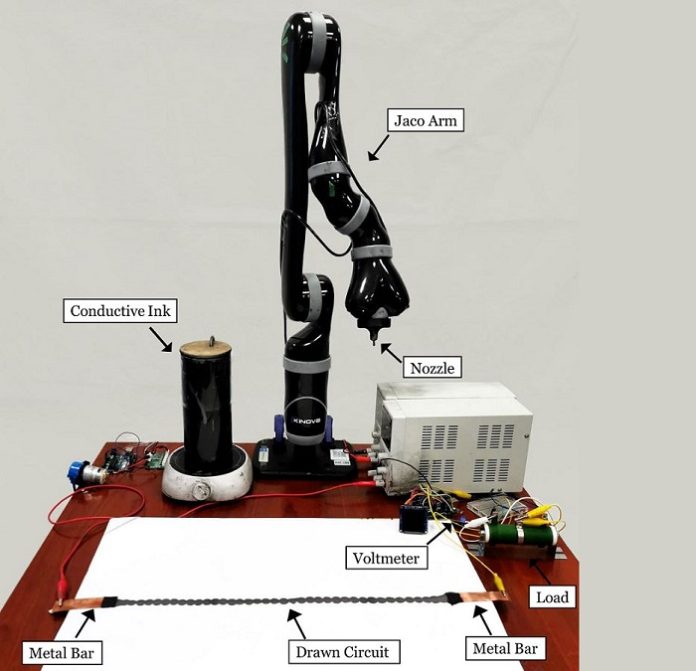 Recent technological advancements have paved the way for the creation of increasingly sophisticated robotic systems designed to autonomously complete missions in different familiar and unfamiliar environments. The robot is meant to operate in uncertain or remote environments and could greatly benefit from the ability to actively acquire electrical power from its surroundings.

Researchers at Worcester Polytechnic Institute, Imperial College London, and University of Illinois Urbana Champaign have recently developed a new robotic system that can visually rearrange its surroundings to receive the maximum amount of energy from a given power source. This robot set is to be presented at the IEEE International Conference on Robotics and Biomimetics works by drawing electrical circuits using conductive ink.

“Nietzsche claims that human’s primal instinct is power, and survival is just a condition sine qua non we couldn’t reach that final goal. Based on this idea, we started to devise experimental settings where our robot could not only act to survive but to thrive.”

In their first study focusing on this topic, Andre Rosendo, Xianglong Tan, and Weijie Lyu tried to devise a system that could power itself merely by painting electric circuits. In their new work, they combined this circuit printing system with a robotic gripper, creating a robot that can perform a repertoire of actions aimed at attaining greater power (i.e., higher voltages) from its environment and thus surviving in unfavorable environments.

The team tested their robot in simulations of different real-world scenarios, including tasks in which it had to avoid physical obstacles or regions that would discontinue its drawn circuits. They then also tested the robot in a real-world setting, to further evaluate its capabilities.

“Our robot starts each experiment with a battery, and its energy source dwindles as it moves (and we also ‘leak’ it to emulate natural energy losses due to homeostasis),” the student Xianglong Tan explained. “The robot goes through a series of virtual training episodes, with a Red terminal (VCC) that needs to be connected to another red terminal near its body, and a Black terminal (Ground) that needs to match the black one so that the current can flow towards its battery.”

To prevent their robot from simply moving in a simple straight line, Rosendo and his colleagues added obstacles in its surroundings, both in simulated and real-world trials. Some of these obstacles, such as foam cubes, could easily be removed by the robots, while others were connected to a grounding plate that “sucked” the electrical power away when a circuit touched it.

The team found that their robot rapidly and effectively learned to overcome these obstacles to survive and maximize the received energy. This meant rearranging obstacles or bridging areas in its surroundings that it could not draw in.

“I think we are taking steps towards adaptive behaviors for robots,” Rosendo said. “Humans are capable of adapting, adjusting their behavior to match the one required in new situations, and gradually improving as their knowledge matures. We could be talking about sports, tasks or even space missions: before being on top of our game we spend our initial efforts understanding the new rules to, later, improve and go beyond. Robots nowadays struggle to overcome malfunctions and learning to adapt to keep themselves functional is a skill that they should mimic from us.”

The adapting robot created by Rosendo and his colleagues could have numerous advantages, as it can autonomously maximize energy in its surroundings and continuously keep itself functional by creating new electric circuits. In the future, this recent work could inspire the development of other robotic systems that can survive and thrive in complex environments without the need for new circuits or human supervision.

“We are now thinking about next steps to build on our work and keep this experiment interesting, such as complicating the task and devising a ‘battery swap’ system to make the experiment more realistic,” Tan added.