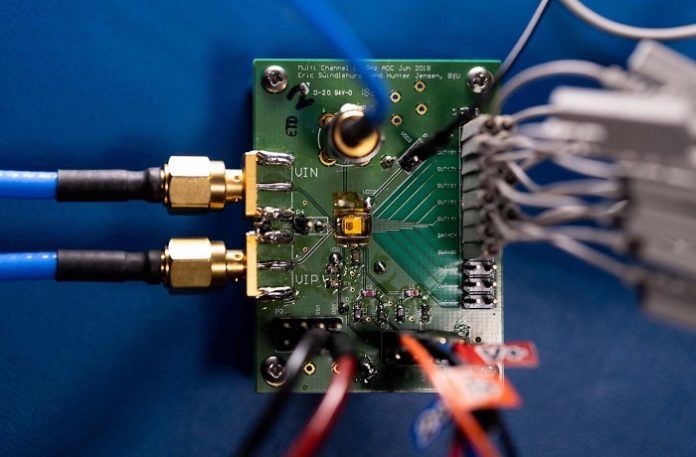 The major reason companies like Apple and Samsung can miraculously pull this off year after year is because engineers and researchers around the world are designing increasingly power-efficient microchips that still deliver high speeds.

To that end, researchers led by a team at Brigham Young University have just built the world’s most power-efficient high-speed analog-to-digital converter (ADC) microchip. An ADC is a tiny piece of technology present in almost every electronic piece of equipment that converts analog signals (like a radio wave) to a digital signal.

The ADC created by BYU professor Wood Chiang, Ph.D. student Eric Swindlehurst and their colleagues consumes only 21 milli-Watts of power at 10GHz for ultra-wideband wireless communications; current ADCs consume hundreds of milli-Watts or even Watts of power at comparable speeds. The BYU-made ADC has the highest power efficiency currently available globally, a record it holds by a substantial margin.

“Many research groups worldwide focus on ADCs; it’s like a competition of who can build the world’s fastest and most fuel-efficient car,” Chiang said. “It is very difficult to beat everyone else around the world, but we managed to do just that.”

The central challenge facing researchers like Chiang is that increasingly higher bandwidths within communications system devices mean circuits that consume more power. Chiang, Swindlehurst, and their team set out to solve the problem by focusing on a key part of the ADC circuit called the DAC, which is a central piece that stands for the exact reverse of ADC: digital-to-analog converter.

For the technologically savvy, here’s a broad explanation of what the research team did:

They made the converter faster and more efficient by reducing the loading from the DAC by scaling both the capacitor parallel plate area and spacing. They also grouped unit capacitors differently from the conventional way, grouping together unit capacitors that are part of the same bit in the DAC rather than having them be interleaved throughout. Doing so lowered the bottom-plate parasitic capacitance by three times, significantly lowering power consumption while increasing speed.

Finally, they used a bootstrapped switch but improved on it by making it dual-path where each path can be independently optimized. This method increases the speed but doesn’t require additional hardware because it involves splitting existing devices and making route changes in the circuit.

“We’ve proven the technology of the chip here at BYU and there is no question about the efficacy of this particular technique,” Chiang said. “This work really pushes the envelope of what’s possible and will result in a lot of conveniences for consumers. Your Wi-Fi will continue to get better because of this technology, you’ll have faster upload and download speeds and you can watch 4K or even 8K with little to no lag while maintaining battery life.”

Chiang said other likely applications for the ADC include autonomous vehicles (which use a ton of wireless bandwidth), smart wearables like glasses or smart contact lenses, and even things such as implantable devices.

The device required sophisticated design and verification to ensure that all the thousands of connections in the converter would work correctly. A single mistake in the design would have taken at least an additional year to correct, so the team was thrilled to have made no mistakes.