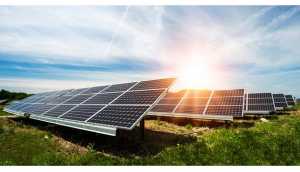 UCLA researchers looked to nature to develop a new material that could capture more solar energy than previous technology.

Ximin He, a materials science and engineering assistant professor at UCLA, has spent more than three years working on SunBOTs, which bend toward the sun to harvest solar energy, similar to sunflowers. She and her team’s research was published in November in Nature Nanotechnology.

SunBOTs have the potential to harvest double the amount of energy that a stationary solar panel could harvest, He said.

“We found, on a day like (a) spring and autumn day, we know where the sun is shining on the earth at Los Angeles’ latitude, we (could) harvest double the sunlight for LA,” He said.

When sunlight shines at oblique or indirect angles, solar energy capture is almost fourfold in SunBOTs compared to solar panels, He added.

For example, when sunlight shines 75 degrees away from a perpendicular line to the surface, SunBOTs harvest 90% of its energy whereas solar panels just receive 24%, He said.

Some current solar panels are mechanically repositioned toward the sun throughout the day. However, this requires additional machinery and energy, He said. A mechanical system would also not work for mobile surfaces like cars because they would be constantly changing direction, she added.

He and her team took on the challenge of creating an intelligent synthetic material that could independently detect light and orient toward it, using nature for the answer, specifically phototropism.

“Phototropism means the plants are able to detect where the light comes from and autonomously … move their head or their leaves toward light (in) real time,” she said. “This inspired us to try to create similar intelligence in man-made material.”

Lynch said one of the challenges with solar energy is that a large surface area is required to capture a small amount of energy, and solar panels have to be positioned at just the right angle in order to harvest energy efficiently.

However, Lynch said He’s technology can reduce this obstacle.

“It sounds like (SunBOTs are) operating at a scale where the action could be happening within the panel at a molecular level,” Lynch said. “If that’s the case that would produce much higher efficiencies with the same amount of space and, potentially, weight.”

SunBOTs’ unique abilities come from their structure and material, He said. Their symmetric shape mimics a plant’s stem, which allows for light to be captured at any area of the SunBOT and makes it easier for the SunBOT to orient itself toward a light source, He added.

SunBOTs are composed of hydrogel and photoabsorbers. Hydrogels, cross-linked polymers similar to Jell-O, are used in household products such as diapers and contact lenses, He said.

Photoabsorbers, such as gold nanoparticles and reduced graphene oxide, are chemicals that absorb light and convert it to heat.

Photovoltaics, or devices that generate electricity from light, can contribute greatly to sustainable design as they are a carbon neutral energy source, Lynch said. Solar energy methods are an example of photovoltaic-based technology.

The key breakthrough of the SunBOT is showing that it is possible to create self-regulating and responsive materials, He said.

“If you come down to the scientific level, the breakthrough … we established (is) a principle of creating self-regulatory movements for almost any type of stimuli,” He said.

The principles used in developing SunBOTs could be used to create materials responsive to changes in temperature, magnetic waves or even chemical signals, He added.

He said she is also inspired by nature and it has allowed her to solve many problems.

“Nature always has the superior wisdom, (strategies) and functions that we can learn from,” she said. “That’s why I am in (this) bio-inspired field, because we can always create completely out of (the) box concepts and ideas to solve a lot of challenging problems for our human society.”

Investment in India’s Clean Energy Dropped 20 per cent to $11...