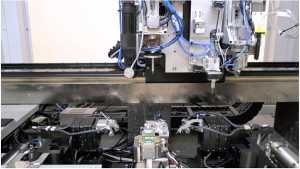 The Horizon 2020 funded consortium TERIPHIC is developing new optical transceiver modules used in internet datacentres that will reduce power consumption by 50% per Gb/s and in turn see lower carbon emissions.

Using light to exchange terabits – or thousands of gigabits per second – the TERIPHIC group expect their new transceivers to solve problems faster and reduce queue times.

Aiming to surpass current ‘gold’ standards of 400GB per second, TERIPHIC (or “TERabit optical transceivers based on InP EML arrays and a Polymer Host platform for optical InterConnects,”) expect their modules to cost €0.3 per Gigabyte per second.

The three year, €5.6 million TERIPHIC project will operate until December 2021 and has received a grant of €4.7 million from the European Commission via the Photonics PPP.

Panos Groumas from the TERIPHIC project coordination team, said: “Photonics is essential for the future of datacentres. TERIPHIC intends to develop low-cost terabit optical transceivers through the automation of current photonic integration concepts and processes in commercial assembly machines.”

“While 400G is impressive, and was demonstrated in 2018, High-Performance Computing, Edge Computing, machine learning, end-user experiences will not run on existing speeds of 400 Gb/s.”

“When the Gb/s power consumption is reduced, data centres will consume less power, and given that they are powered by power plants relying on various fuel sources including coal, we will see a significant reduction in carbon emissions.”

Project Leader, Professor Hercules Avramopoulos said: “TERIPHIC will bring together EML arrays in the O-band, PD arrays and a polymer chip that will act as the host platform for the integration of the arrays and the wavelength mux-demux of the lanes.”

“The integration will rely on butt-end-coupling steps, which will be automated via the development of module-specific alignment and attachment processes on commercial equipment.

“The new transceiver design introduced by TERIPHIC will allow significant cost savings, due to assembly automation of both the transmitter and receiver optical subassembly (TOSA/ROSA) parts, and also at the packaging level, resulting in a cost of around €0.3 per Gb/s for the transceiver modules,” Avramopoulos said.

“TERIPHIC is an industrially driven project with specific and well-defined technical objectives. The technology that will be developed and delivered by the project is feasible due to the unique expertise that each one of the consortium partners brings to TERIPHIC.

The project is coordinated by the Photonics Communications Research Laboratory (PCRL) of the Institute of Communication and Computer Systems (ICCS) at NTU Athens, Greece.

Nanowire use could be advanced in silicon photonics by control of...

Next-Gen Sensors could get a new way by moving 2D Circuits...