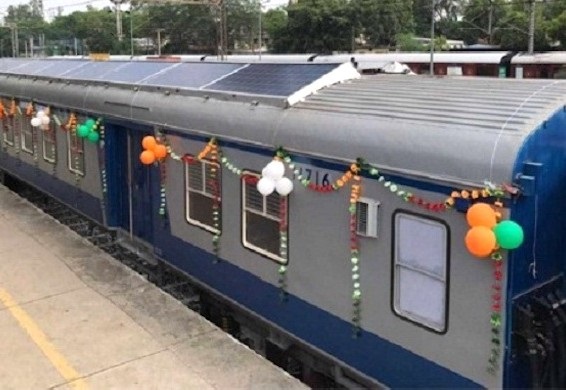 The Indian Railway has always been a fast adapter of latest technologies to ensure customer satisfaction and improved facilities. It is accelerating its efforts to install and use renewable energy as part of its objective to reduce carbon footprint and reduce its power costs.

World’s one of the top railway network with large connectivity aims to source about 1,000 MW of solar power and about 200 MW of wind power by 2021-22. Currently, it consumes 200 MW of clean energy and its total power requirement is estimated at about 2000 MW.

Railways is working on solar rooftop, ground-mounted and wind power projects. The renewable energy projects are being implemented by the Railway Energy Management Company Ltd, a joint venture of Indian Railways and RITES Ltd.

Here is some of the latest advancements in the Indian Railways:

In the wind energy sector, the Railways has already installed 103.4 MW of the targeted capacity of 200 MW.

Railways is planning to install 500-MW solar plants on the roof top of railway buildings through the public-private partnership mode with 25-years agreements, which will be used to meet non-traction loads at railway stations.

Of this, 96.84 MW of solar plants have already been installed and 16 stations have been declared green railway stations across zones. These green stations meet their entire energy needs either through solar or wind power.

Work is in progress in about 111 MW Solar plants, while tenders for 93 MW solar plants have recently been awarded by REMCL. It has also floated tenders for 45 MW rooftop solar capacity. The remaining 154 MW is under different stages of planning, according to an official document.

Railways is also planning about 500 MW ground-mounted solar plants to meet traction and non-traction requirements. Of this about 3 MW has already been installed at the Modern Coach Factory, Rae Bareilly.

A 50 MW solar power project on a 300-acre vacant railway land in Bhilai, Chhattisgarh is being installed and is expected to be commissioned by March next year.

Railways is also planning to source power from the upcoming solar park in Madhya Pradesh which is being developed by Rewa Ultra Mega Solar (RUMS) Ltd, a joint venture between Solar Energy Corporation of India and Madhya Pradesh Urja Vikas Nigam Ltd.

The proposed capacity of the solar park will be 1500 MW and of which 400 MW will be supplied to the Railways in Gujarat, Maharashtra, Rajasthan, UP-ISTS (interstate transmission system), UPSTU, Haryana, Jharkhand, DVC and Bihar.

The power from the solar park will be supplied under optimum scheduling method and limited to 207 MW (equivalent to 400 MW solar plant capacity). This proposed state-wise distribution of solar power will help the Railways meet its Solar Power Obligation targets, according to the latest annual report of REMCL.