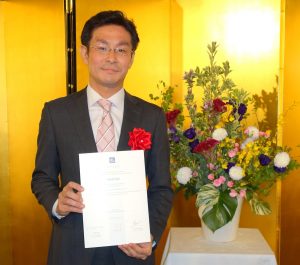 Created in 2004 by the IEC Executive Committee (ExCo), the 1906 Award commemorates the IEC’s year of foundation and honors IEC experts around the world whose work is fundamental to the IEC. The award also recognizes exceptional achievement related to the activities of the IEC and which contributes in a significant way to advancing the work of the Commission.

Mr. Doi served as a working group leader from 2014 for IEC TC47/SC47A, which is an IEC subcommittee concerned with integrated circuits (ICs). During his role as the convener, Mr. Doi has contributed significantly to international standardization of the IEC 62433 Series standard for electromagnetic compatibility (EMC) simulation modeling at the IC level.

With the miniaturization of semiconductor devices supporting the advancement of electric and electronic devices, the time needed for EMC noise design and EMC noise countermeasures is increasing. However, if the technical contribution recognized by this award becomes more widely adopted, it will simplify noise design in electric and electronic devices. This, in turn, will contribute to not only reducing development time and costs but also enable faster time-to-market for end products.

The 1906 award recognizes 187 people worldwide including 31 recipients from Japan. An award ceremony was held at the 2017 Industrial Standardization Business Award Ceremony sponsored by the Ministry of Economy, Trade, and Industry, on October 23, 2017, at Hotel Otani, Tokyo.

Electric Internet of Things would be the new zone for industry...