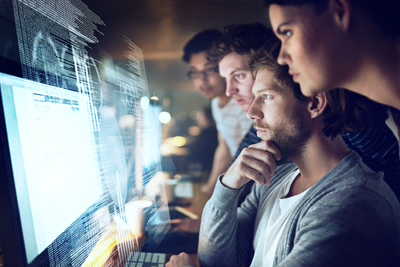 There is a very beautiful cathedral in Barcelona called Basilica de la Sagrada Familia, which was designed by the architect Antonio Gaudi.  He began work on the church in 1883, more than 50 years before the concept of modern computers was established. Unlike architects today, Gaudi did not have a powerful computer to create a 3D model of the church. Instead, he created an upside-down model by tying small sandbags to strings, and then tying the strings to each other, creating the shape of stronger columns and letting gravity design the arch shapes.

I have always thought that builders were the first ones to introduce the concept of modelling and simulation. They needed to create a simplified and accurate version of a highly complex structure before starting with the construction of it. But of course, modelling and simulation is nowadays used in many other engineering areas, one of them being power electronics.

Using the right tool for the job

Trial-and-error has been (and still is) the most-used method for validating a power system’s design. This approach is time-consuming and costly, and depending on the output power level, the time and costs of it could increase dramatically. However, new simulation software dedicated to evaluating power electronics are becoming more and more important to get a first impression of the system behavior.

In simulation software, a model is a reduced representation of reality, and the challenge is to find the right level of abstraction for the right purpose. Therefore, we need to provide different levels of abstraction with clear documentation of which features are represented and which attributes are (intentionally) neglected at which levels.

In general, as depicted in Figure 1, when we need to simulate a power electronics system, there are three levels to evaluate: Semiconductor, Converter, Full system

We can summarize the difference in the following table:

A result can be seen in different ways, so the important thing is to calibrate the view

Probably the most common word when people talk about simulation is GiGo “garbage in – garbage out”.  Simply put, if our simulation model is wrong, then the results will be meaningless. And that is the reason why a lot of people are still hesitant to use simulation tools for validation and prefer using real-life experimental prototypes. Even when a model is highly accurate, it is still not accurate enough to be considered as an exact representation of a real device. But does that mean we cannot rely on the results? Well, it depends how we interpret the results.

A simulation result used to improve a system design

To explain this point, let’s take the lifetime estimation tool as an example. Let’s assume that after running the simulation, we obtain the results depicted in Figure 2.

And at the end, we get the lifetime estimation result as depicted in Figure 3:

Does it mean that after building up the experimental prototype and testing 2.314×107 cycles, the device will start failing? The short answer: no.

With solely the result of the lifetime estimation value, we cannot give a complete answer. We need to analyze where this value comes from, and this must be used as guidance to improve the system design that is being evaluated, before starting with the experimental construction.

In this example, we can see that the cycle’s limitation comes from the few numbers of high temperature swings, which are being generated when the output frequency is low. This means that if this lifetime estimation result does not fit with the requirements, then it would be necessary to investigate in detail about the mission profile, to change some operation parameters, modify the cooling conditions, change the modulation algorithm, or even select and evaluate a different power device.

If after a second iteration of modifying the mission profile and cooling conditions, for example, we get a better result in terms of lifetime, but we know that we are being very conservative, then we can go for a third iteration where we try to get closer to the original values. We can repeat this process as many times as we need to. The idea of this kind of approach is to provide guidance so the user understands the effects of the different degrees of freedom. It may be the case that modifying the cooling conditions results in the lifetime improving by 5%, but changing the modulation scheme improves it by 20%. Then the user can start focusing on software improvement and not on the hardware side.

The following table summarizes a simple iteration process to achieve an optimal design.

A simulation result used to select the right power device

Another simple way to use the same tool is when a device must be selected from different options [2]. This example has been explained already in a previous blog article, but we can summarize it as follows. We must reach more than 10k cycles and three candidates have been evaluated as summarized in the below table.

As can be seen, even if the three devices are rated in terms of electrical parameters, just the FF1500R17IP5R achieved the desired number of cycles (>10k cycles). For this kind of evaluation, the simulation results are not intended to provide an absolute value to be used, but to allow us to select the right device for our application.

Trial-and-error in a digital era

Analysis and validation using simulation tools is a clear way to help industries reduce waste from trial-and-error methods and accelerate their design and validation processes. But first, people need to understand how to interpret the results coming from a simulation. In general, the trial-and-error approach must be left in the past. In this new era of digitalization, we are able to create virtual models of almost anything we can imagine. We have in our hands so many powerful tools that can support us – we no longer need to hang sandbags on strings anymore.