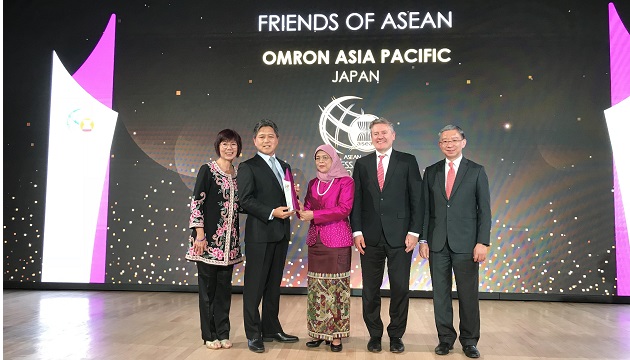 OMRON Asia Pacific Pte Ltd received the ‘Friends of ASEAN Award’ at the ASEAN Business Awards (ABA) in Singapore. The awards were hosted by the ASEAN Business and Advisory Council (ASEAN-BAC) to recognize the most outstanding and successful ASEAN companies contributing to ASEAN’s economic growth and prosperity.

The ABAs are the first awards in the region of their kind and have the dual objectives of recognizing outstanding ASEAN enterprises and serving as a platform to spread information concerning the ASEAN Economic Community (AEC) and regional integration. The Friends of ASEAN award specifically recognizes non-ASEAN owned enterprises that has demonstrated a continuous and increased commitment in growing their presence within ASEAN.

After receiving the prestigious award, Iitaka said: “At OMRON, we aim to be an active member of the ASEAN community by supporting the development and adoption of advanced innovations in the region, such as our Sensing & Control + Think technology. One of the ways we do that is collaborate with local partners and academic institutions and drive training and other talent development initiatives.”

“Staying true to our principle of achieving innovation driven by social needs, we are honored to be the first Japanese company to receive this award as we continue to innovate and provide support in the region that addresses specific social needs in ASEAN” he added.

Significant investments have been made in the region recently, such as expansions into new manufacturing facilities in Indonesia and Vietnam in 2017, and special focus has been given to human capital growth and development in both direct and indirect employment. More than 80% of top managerial positions in ASEAN entities come from the local workforce. In Indonesia, 2% of OMRON’s workforce also includes people with disabilities – an achievement in excess of the legal 1% minimum and recognized by the International Labour Organisation and the Indonesian government.