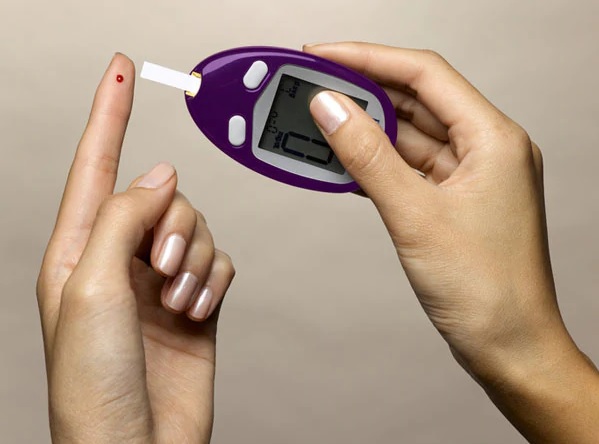 According to the International Diabetes Federation’s 2015 report, an estimated 415 million people suffer from diabetes. That year, one person died every six seconds from complications of the disease and treatment of diabetes cost health-care authorities a staggering $673 billion (12 percent of global healthcare expenditure). Diabetes is a major pandemic, and the trend is rising.

Diabetics typically measure blood glucose levels using meters with test strips containing glucose oxidase, an enzyme that reacts to glucose in the applied blood droplet. “When the strip is inserted into the meter, the flux of the glucose reaction generates an electrical signal,” explains Michael Strano, an Associate Professor of Chemical Engineering at MIT. “The digital readout corresponds to the strength of the electrical current: The more glucose in the sample, the higher the number.”

Strano’s group is working on an alternative that does away with finger-pricking by employing an ink made of glucose-responsive carbon nanotubes injected under the skin. When near-infrared light is shined on the ink, it changes color in response to the blood glucose level.

Other technologies have further eased diabetic management and are becoming more common. For example, insulin pumps eliminate injections by delivering infusions of insulin via a subcutaneous catheter. Continuous Glucose Monitors (CGMs) alleviate the tedium of frequent finger-pricking. And the “artificial pancreas”—whereby a CGM wirelessly paired with an insulin pump mimics the body’s own blood glucose-lowering mechanism and requires no user intervention—is passing through regulation. That regulation might take a few more years but the technology is proven.

Today, CGMs might be preferable to frequent finger-pricking but they’re not without drawbacks; they’re expensive, fiddly to insert and carry the risk of infections and abscesses forming at injection sites.

Blood Glucose Measurement for All

While healthy people are at much lower risk of abnormal blood glucose levels, the body’s systems are not perfect—especially when being strained by sugar-laden diets and sedentary lifestyles—and many could benefit from monitoring that triggers a warning to turn down that extra donut. There’s plenty of anecdotal evidence that perfectly-healthy “quantified selfers” are taking to CGM to fine-tune their diet.

Adding this growing band to the 29 million US Type-2 diabetes sufferers equals a juicy potential market, so it’s perhaps little surprise to learn that life sciences companies have spent hundreds of millions of research dollars investigating non-invasive blood glucose measurement to eliminate the drawbacks of finger-pricking and GCMs. The problem is that it’s a tough nut to crack. Some companies have been working on the challenge for four decades without success. A 2012 academic study listed no fewer than ten techniques for non-invasive (or at least minimally invasive) blood glucose measurement including several forms of spectroscopy, transdermal (pulling glucose through the skin), ultrasound, tomography, fluorescence, and polarimetry. The study concluded that none of these techniques had yet resulted in a commercially viable product.

But the lack of success is not putting new entrants off with the lure of millions of sales for a viable product tempting wearables makers to get in on the act. For example, consumer electronics giant Apple is rumored to have a specialist team working on the problem. According to US news channel CNBC, the initiative is far enough along that Apple has been conducting feasibility trials at clinics and has hired consultants to ease the path through regulation.

The efforts have been going on since late Apple co-founder Steve Jobs envisioned wearables being used to monitor important vitals, such as oxygen levels, heart rate, and blood glucose. Apple’s technique is said to involve shining a light through the skin to measure indications of glucose using an optical sensor (spectroscopy). A key technical challenge is miniaturizing the technology enough to fit a watch and filtering out the tiny optical signal of the glucose molecules from background light. At present, most optical solutions weigh in at several hundred grams and only work well if shrouded in darkness.

Alphabet, the parent company of Google, is also working on solutions. One of its experimental efforts is a minimally-invasive method using a contact lens, which reads blood sugar levels in tears and wirelessly transmits the reading to a smartphone. Meanwhile, Fitbit’s approach is not to try and crack the non-invasive glucose measurement problem itself (at least that’s what the company is saying in public). Rather Fitbit has chosen to introduce an app that correlates the data its products already gather against independent blood readings so users can see the effect of exercise on their blood glucose.

Other wearable efforts include the InfraV smartwatch, which was the subject of a successful crowdfunding campaign in late 2014. The company claims the device uses a form of spectroscopy to measure blood glucose, although little has been heard about InfraV since the campaign concluded.

Adding blood glucose functionality to a wearable that already supports heart rate and heart rate variability measurements, skin temperature, and blood oxygen and pressure levels would likely lead to impressive sales. Apple no doubt sees the technology boosting sales of its smartwatch. However, producing (and getting approval for) a medical-grade device is likely to challenge even the world’s largest electronics company and could therefore still be some years from market. But it’s reasonable to expect Apple and others to introduce “lifestyle-advice only” wearables soon that provide a guide to blood glucose levels with around +/- 20 percent accuracy, which would enable diabetics and others to at least identify trends and peaks. Finger-pricking will be around for a while, but the next generation of wearables promises to significantly reduce its frequency.